Read update by Bungie below or @ https://www.bungie.net/en/News/News?aid=14083

Hello Internet,
My name is Sage, and it’s been my pleasure to guide the Sandbox for Destiny.  At Bungie, we define the player “Sandbox” as anything the player directly interacts with.  So Weapons, Subclasses, Abilities, Armor, Exotics, Vehicles, etc. If it feels good to move and shoot, (“Sweet!”) that’s us.  If it’s totally broken or un-balanced, (“Boo!”) that’s also us.  We want the game to be amazing just as much as you do.
TL;DR: If you don’t care about the Why and only want the What, scroll down to the bottom for an excerpt of the 2.0.1 Patch Notes.
Now, brace for a wall of text!
Last time you heard from me, I promised that we would make an effort to update the live game more often (vs. spending all of our time making new hotness).  “Newsk” has been leading the charge for Weapons already, but this will be the first time we have ever significantly touched Class balance.  Why did it take so long?  Well to be honest, this is the first time that we have felt it was necessary.  That’s not to say that we think the Classes have been perfect – far from it.  Previously, the desire to make changes were overshadowed by some higher-priority things (like fixing Thorn or making new Sub-Classes and Exotics).  It’s finally time to make some changes.
Before we shipped The Taken King, the Sunbreaker was feeling so sweet that I was walking around telling everyone we should add an additional subtitle to the game.  Something like “Destiny: The Taken King: Rise of the Titans.”  Although I wanted the Titans to have their moment in the sun, we didn’t intentionally ship them hot.  At the time, our internal data and playtests showed that the Sunbreakers were strong, but not overly so.  Yeah, I know, how could we be so dumb? It’s possible that I may have overdone them just a little bit.
Before we dive into the changes, I want to point out something about how we make Sub-Classes.  When we create a new Sub-Class from scratch, one of the things we try to do is to weave three strong paths into the fabric of the build.  You can see evidence of this in all the Sub-Classes, but some are more successful than others.  Typically, a path starts with one of the Super upgrades, and then creates additional synergies with the remaining passives/melee/grenades.  Why is this important?  Because, although the Sunbreaker definitely has a balance problem, that problem is mostly confined to what I would call the “Hammer more Hammers” path (Forgemaster + Flameseeker + Cauterize).  So you can expect changes to those nodes, bringing them in line with other paths.
“Enough Talk!  What are you actually doing!!!”
First up: Melee Range.  We are extending base Melee range for all Titans.  It would take another few pages to explain the entire sordid history of Class balance that led us to the current situation with Titan Melee vs. the other Classes.  Let’s just say that I agree that the Titans should be the primary Melee Class, but that’s not going to happen overnight.  We are not touching the melee for the other Classes, but we are extending the Titan’s Melee range from 4m to 4.5m (a gain of 12.5%).  This should improve the feeling of having short, little, inadequate T-Rex arms.  I’m also touching Catapult Lift because it was awesome once, but we nerfed it in a fit of panic right before we shipped Destiny back in 2014.  The slight bump to initial velocity should help it be more competitive with the other Lift choices.
Now let’s look at some hard data to help explain some of the other changes.
DATA! PvP kill death ratio for the past 90 days
(6v6 modes only, Mayhem excluded) 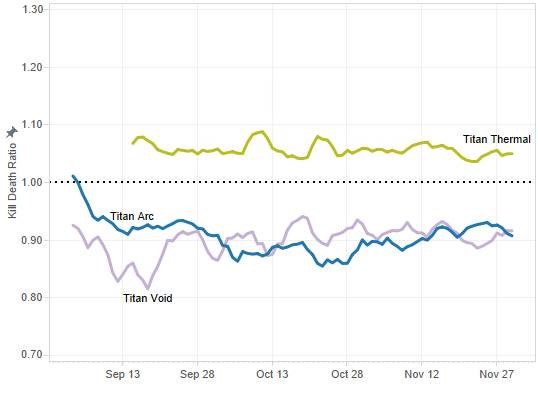 This chart shows what the average Kill/Death Ratio looks like in PvP across the Titan Class for the past 90 days.  As you can see, the Sunbreakers (Solar Titan) average KD is high (~1.06), while the other Titans are in the basement.  For the Defender (Void Titan), that’s actually okay, because they’re intended primarily as a support Class.  In other metrics, we see that Teams with Defenders fair significantly better (HINT: Consider some Void Titan backup in your future Iron Banner plans).  Living in the KDR basement is not okay for the Striker (Arc Titan), so they need to come up a bit.
I know from other data that the Sunbreakers high KD can be attributed mostly to the Hammer of Sol.  Most of the other Sub-Classes hover around 14% Super Kills in PvP. The Sunbreaker is closer to 19%, so that needs to come down.

Note 1: Yes, you are seeing behind the curtain. Internally, Solar = Thermal.  Bungle Secrets!
Note 2: I’m not showing the other Classes in this chart but all of the other Classes fall in the (0.91 – 1.06) KDR range.

Next, we’re looking at the Class distribution across the game.  In the PvP section, you can see that the Sunbreaker (Solar Titan) is dominant relative to their Arc/Void brothers and sisters.  This should come as no surprise to anyone who has been playing PvP recently, but I thought you might appreciate seeing the actual distribution.  As I said before, the Defender is a force to be reckoned with when played correctly (providing back up and “Instant Base!” functionality to a team).  However, they could use a little additional something to avoid getting squashed in the chart below.  So, we’re giving the Defender back their Grenade and Charged Melee on Super cast.  That should help make them “Ready for Anything.”
DATA! Subclass distribution for the past 90 days 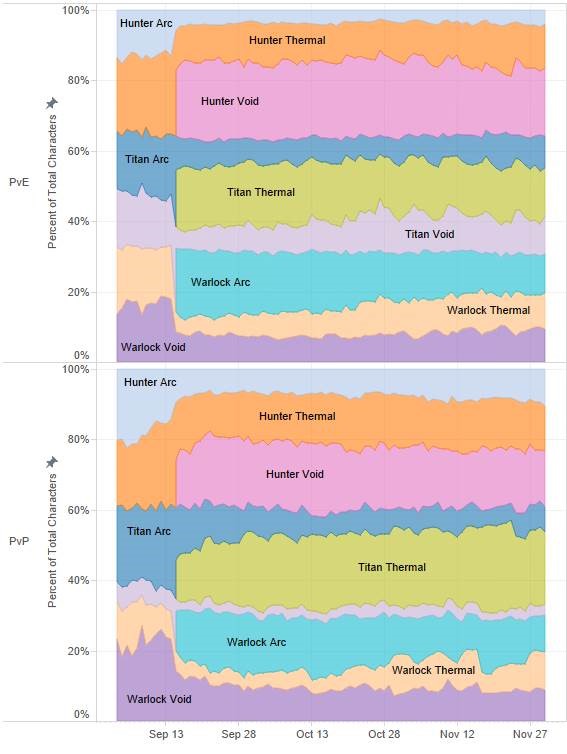 Given all that, we arrive at these simple goals for Titans:
Those goals result in the following change list.
Titan Patch Notes:

I hope you are all excited about these upcoming changes to the Titan Class.  I know the Sandbox team is.  Keep playing and posting feedback, and we will keep reading it, analyzing data, and pushing to continually improve the game.  Looking at these changes the first time, some may say we ruined the Solar Titan.  I assure you we have not. They are still very, very good, but you’ll find that out for yourself soon enough.
Thanks for reading, stay safe, and keep punching all the things.
-Sage