This week at Bungie, we’re getting ready to shine some more Light on your Guardian.

If you consumed your dose of developer commentary last week, you know that the Heroic Mode of Wrath of the Machine arrives next week. A more challenging Raid is not all that’s about to change in Rise of Iron. With greater risk comes greater reward.

We have almost a full month of battling the Devil Splicers under our belt. In that time, we’ve studied your progression through these new adventures. We’ve also had time to react to what we’ve learned.

Before you embark on your next mission to destroy Aksis, there will be an update to download.

To be a Guardian is to quest for greater power. On Tuesday, new avenues to higher Light will open up to you. Prepare to receive a fresh download. The vehicle for this evolution will be numbered 2.4.1. 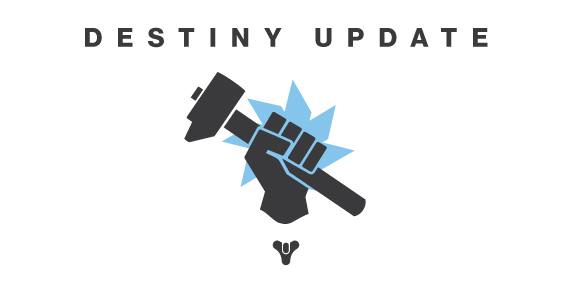 When it comes to matters of investment and progression, our Live Team looks to Senior Designer Victoria Dollbaum. She’s the foremost authority on how the Engrams you find in the Plaguelands behave when you deliver them to the Archivist.

Victoria: On October 18th, corresponding with the release of Heroic Mode for Wrath of the Machine, your Maximum Light will be increased to 400. With this increase, many reward sources will also increase their maximum Light. Strike Hoards, Nightfall, Exotic Engrams, Trials of Osiris, Crucible, and Iron Banner will now provide rewards up to 400 Light. Archon’s Forge, the Heroic SIVA Strike playlist, and Legendary Engrams will now provide rewards up to 385 Light. Rare Engrams and the SIVA Strike Playlist will now provide rewards up to 365 Light. The recommended Light for these activities will remain the same with the exception of Nightfall, which will be increased to a recommended light of 380. For those striving to reach Heroic Wrath of the Machine or even attempt their first run at Normal Wrath of the Machine, players should find more paths and options available to them to reach the recommended Light.

For players forging their path through Wrath of the Machine, Trials of Osiris, and Iron Banner, these activities will now attempt to reward higher Light on average, compared to your current Light.

There are more changes to come. Those announcements are yet to be… unmasked. In the meantime, we’re looking for heroes to brave a harder Raid.

When you talk on the Internet, it’s comforting to know that someone is listening. At Bungie, we maintain an entire team to do just that. We call them Destiny Player Support.

As stated above, on Tuesday, October 18th, Destiny Update 2.4.1 will become available to players on PlayStation 4 and Xbox One consoles. This update is expected to become available around 10:00 AM PDT. While there is no expected downtime, PlayStation 4 players will receive Error Code CAT, and be returned to the title screen. Xbox One players will be removed to the title screen after returning to orbit from an activity. Stay tuned to help.bungie.net and @BungieHelp for additional information.

Since the release of Destiny Update 2.4.0, we have been collecting, investigating, and confirming player reports of issues impacting Destiny: Rise of Iron. All known issues that have been confirmed by Destiny Player Support may be found within the Destiny: Rise of Iron Known Issues thread. The following have been the highest trending on the #Help forum over the last three weeks:

The following issues have recently been confirmed and added to our known issue list. Reports have been forwarded to the appropriate teams for further investigation.

We are also aware of reports that bungie.net public forums were not appearing properly on the Destiny Companion App, and the Recruitment forum was impacted by performance issues. On Wednesday, October 12th, server side changes were made to address these issues. Players should be able to view all forums and interact with Recruitment posts once more. If you continue to experience issues when attempting to access features on the Destiny Companion Application, please post a report to the #Help forum.

Cozmo: Another week has come and gone. With it brings new Movies we humbly highlight here for your entertainment. The Creations page is still alive and well. It’s practically bursting at the seams with submissions. It’s a mixture of montages, massive plays, and more. The winners will be granted a specialEmblem as a tribute to their accomplishment.

But enough of this small talk, send in the winners.

Movie of the Week: Reflection Playground

If you were there with us on Twitch when we traded blows with volunteers from chat, we thank you. We always love sharing games with the community, and it’s always a learning experience. For instance, in exchange for the Emblems we passed out, we claimed these new pearls of wisdom:

2. Never tease a secret code without alerting the community to the fact that not all amusing Easter Eggs hatch to reveal Exotic Weapons.

There is no playbook for this. We’re writing it as we go along. Wouldn’t have it any other way.

It promises to be a windy weekend here in the otherwise gentle and majestic Pacific Northwest. Storms blowin’ in! We now go to batten down our hatches.

Good luck with that Heroic Raid. As always, we’ll be waiting for you at the finish line with some sweet loot and a big old pat on the back.

This week at Bungie we're getting ready to shine some more Light on your Guardian.https://t.co/CQnoA3OIBe pic.twitter.com/198wEfk1s9