When you fight your way all the way down to the depths of a Golden Age vault to confront the final boss in a campaign, do you ever wonder how we go about bringing that character to life? Your adversary in a video game is the product of art and science and imagination. One member of our team wanted to share with you the adventure of development that resulted in a mutated Iron Lord stalking you through the chamber where Destiny: Rise of Iron draws to an explosive conclusion. 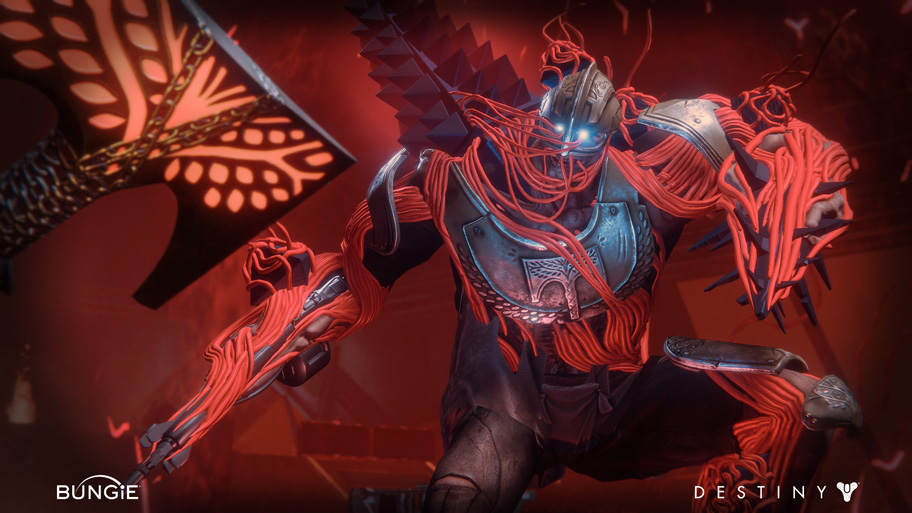 Hi, my name is Ian McIntosh and I am a Character Artist at Bungie

If you haven’t played through the final story mission yet for Rise of Iron, you may want to stop reading this and avert your eyes.

I had the pleasure of creating the 3D model for the final boss. To avoid spoiling the story of what happened to the Iron Lords, we’ve waited until now to proudly share the process for creating one of the more disturbing characters in the game. If you have played it, you know what I’m talking about. I want to share with you my experience of what it was like to make this provocative character and give you a glimpse of what it is like working as a Character Artist at Bungie. 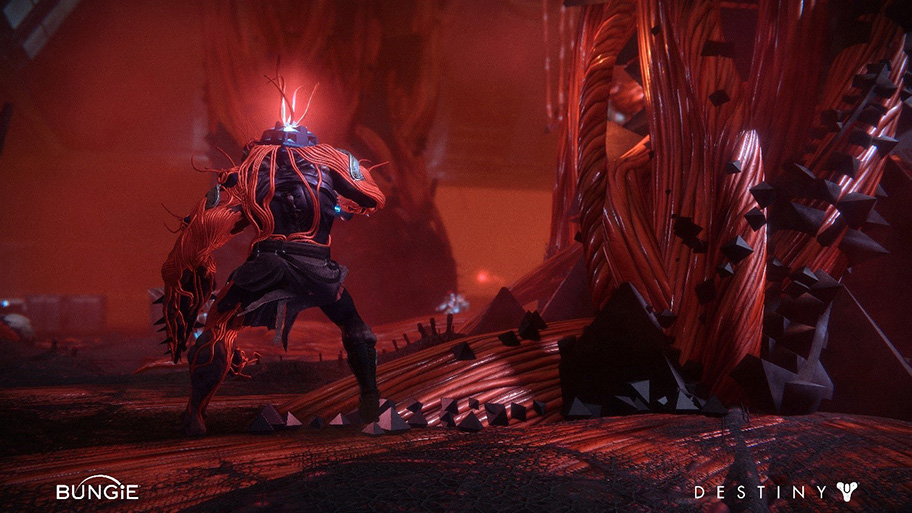 The process of building a character like this starts with an idea. In this case, that idea was dictated very much by the story that that was created by the writing team. With this gem of an idea, Concept Artist Patrick Bloom, did a few different explorations and ultimately produced a wonderful painting of what a SIVA-infected Iron Lord looks like. Art Director Shiek Wang chose the aspects that he liked best from the different options. 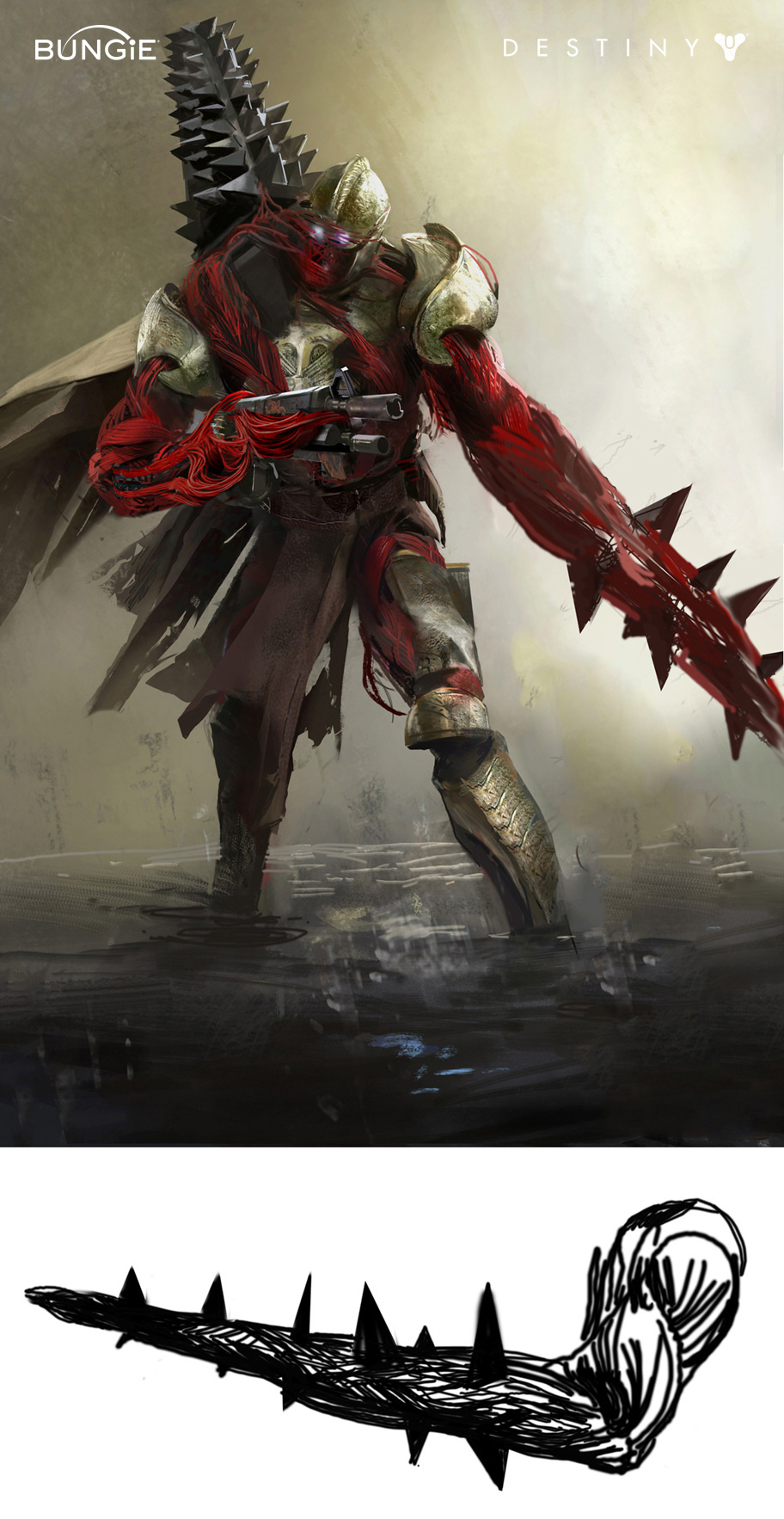 We then formed a team of ten people to work on the whole boss encounter. The people I worked closely with to block out the boss characters were Technical Animation Lead Matt Kelly, AI Designer Matt Findley, Tech Art Lead David Hunt, and Art Lead Keith Bachman. As a starting point, we used the animation rig and skeleton from the Hive Knight. This allowed Matt Kelly to use the existing Knight animation set. To give the Iron Lords their own unique stance, we layered on top of it a hunched pose. Additional bits of animation like the jump were later added to complete the Iron Lords and make the gameplay Matt Findley was crafting for them feel different. 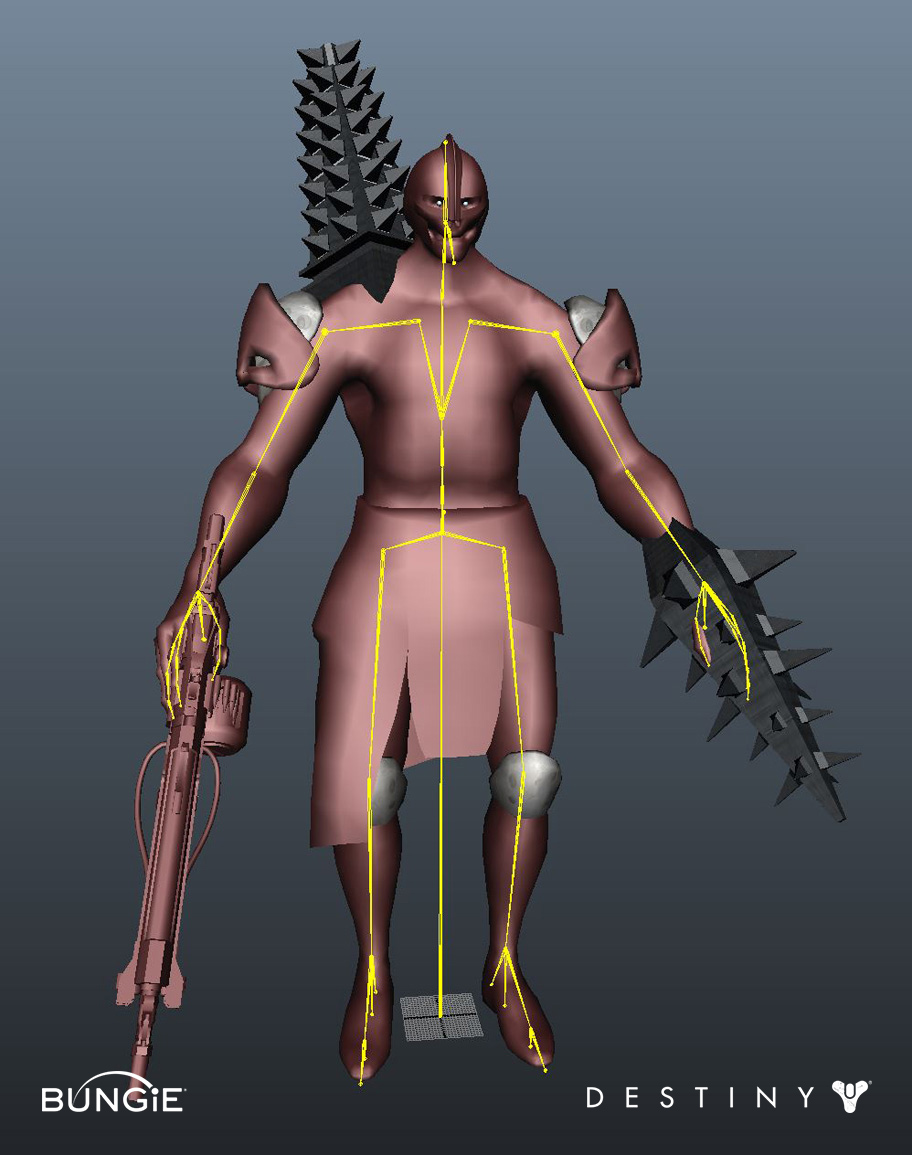 At this early stage, my job was to make a quick and unrefined low-poly mesh that approximated what the finished model would look like without any textures or details. The main things we wanted to get right at this point were the general shape and size of the arm spike and gun. We also focused on the monolithic SIVA structure imbedded in its neck which acts like a brain/head and fires off rockets. The various stages of damage that the monolith takes were also figured out early on. The idea was that this is the weak spot. In this way, we were able to quickly get the Mutant Iron Lords working in game so that we could each simultaneously work on them and iterate without wasting time.

Through the iteration process, we were able to refine the look and feel of the corrupted Iron Lords as well as how they behave to a point where we were all satisfied with their rough block-out form. Only then did I begin the lengthy process of sculpting the high poly model using ZBrush. 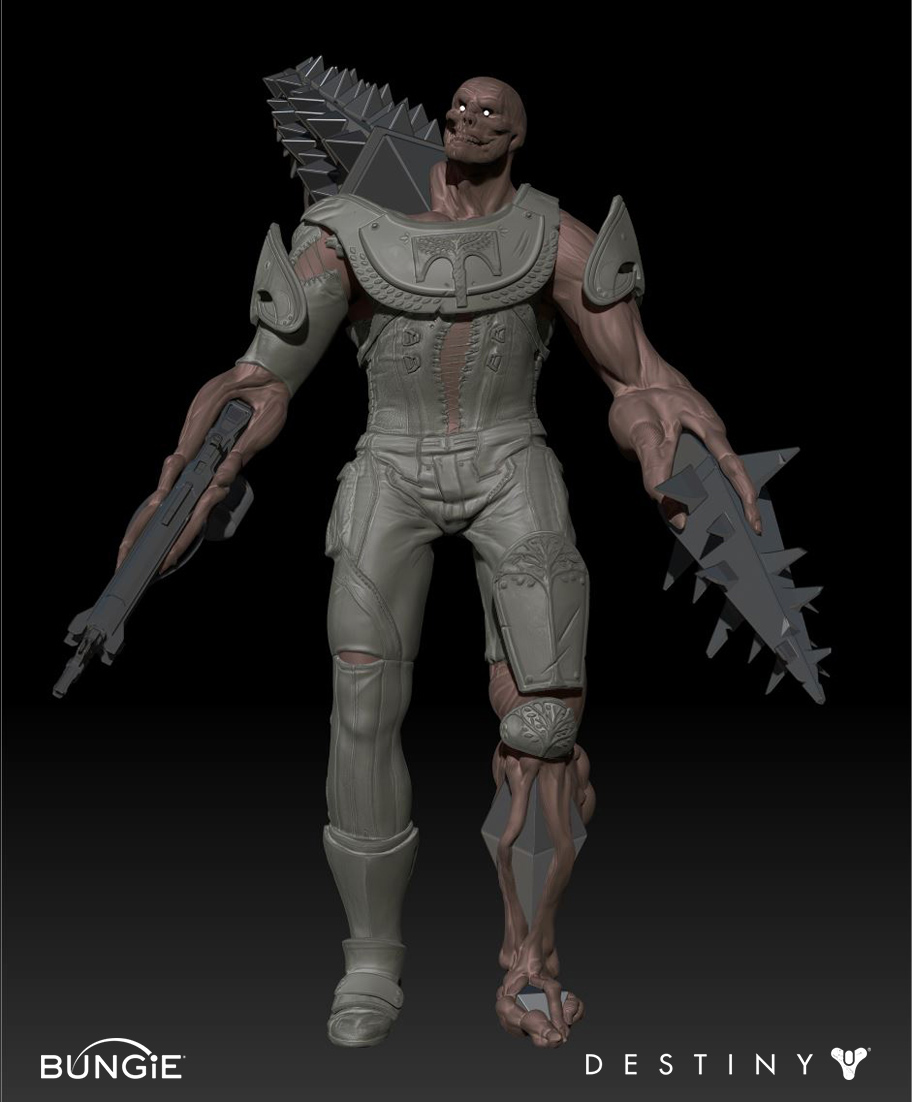 The block-out I did of its body served as the foundation I used to start sculpting the raw flesh.  I also started to incorporate some SIVA octahedron shapes tearing through the flesh to give you the impression that SIVA is growing inside their bodies and stretching them out into a larger, more menacing size. I really wanted players to see the horror of what SIVA has done to the Iron Lords to really sell how scary SIVA is and the treat it represents (without being overtly gory with the details).  Most of this was only hinted at in the concept painting. I took it a step further and exercised my artistic license to flesh out the vague areas.

For the clothing and armor, I took several existing pieces that had been created by other character artists who were working on the Iron Lord and Iron Banner gear and began forming it around the body. This involved lots of altering of the various bits in order to add rips, stretching, and other customizations. I matched the look from the concept, turning what was once very symmetrical gear into a completely asymmetrical mutation. 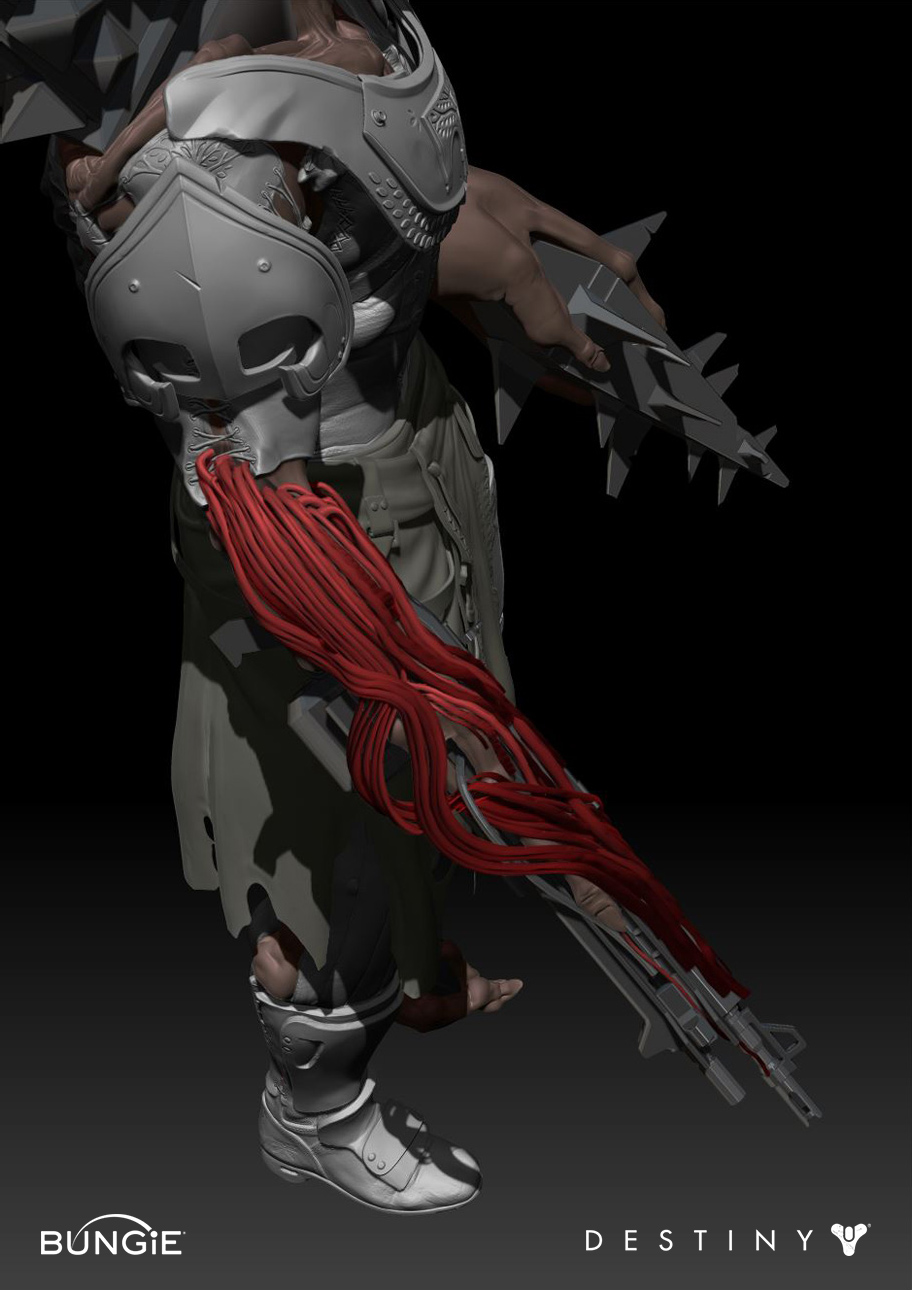 The SIVA wires were a whole other can of worms. The technique I came up with to sculpt them was novel compared to how any of the other SIVA wires were made. I used ZBrush’s fibermesh tools (which are generally used to make fur and hair) to generate the initial tube geometry. I used the grooming brushes to shape the individual strands and form them around the underlying body. Then I converted the fibermesh to regular geometry and did a polish pass on it to fix any issues and smooth them out. It’s hard to say if this technique was way faster than doing it another way, but the results were what I was after. 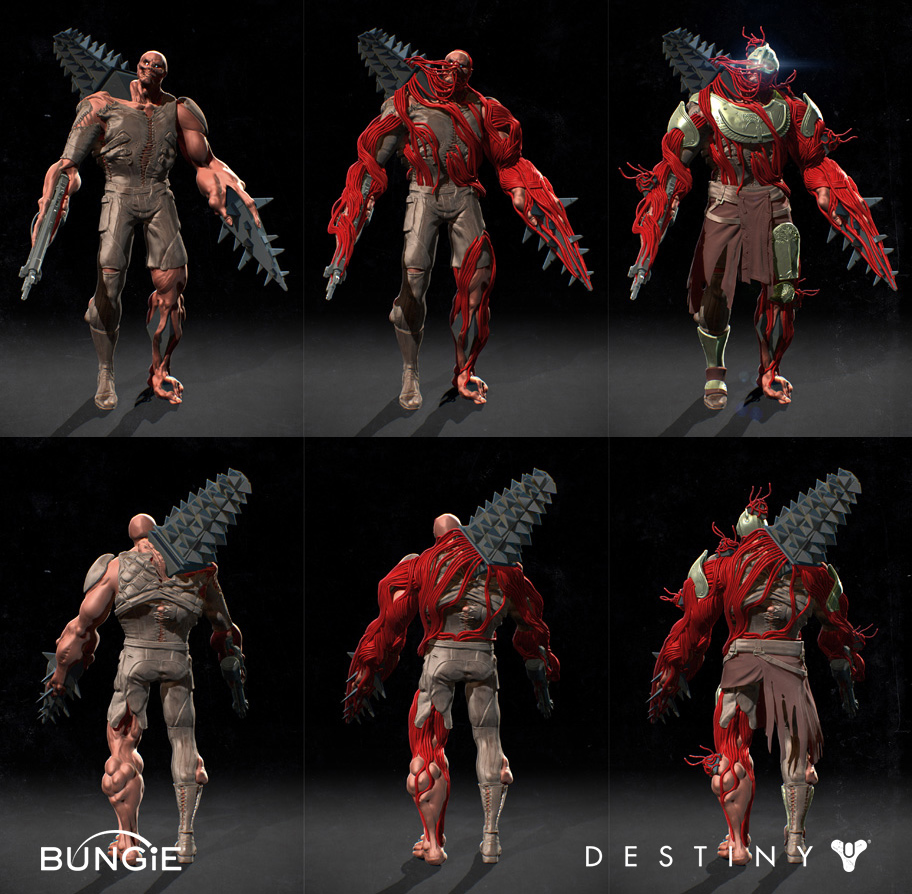 With the high poly model finished (which consisted of millions and millions of polygons), I moved on to the next stage in the process, which was creating the low poly geometry seen in game. This involved retopologizing the mesh, creating UVs, and baking texture maps. The end result was a model that looks just as detailed as the high poly model but optimized down in a way where it could easily animate and render inside of the game engine. Given the totally asymmetrical design, the layers of clothing, as well as all those wires, this process was especially time consuming for the Mutant Iron Lords, compared to most other characters in Destiny. 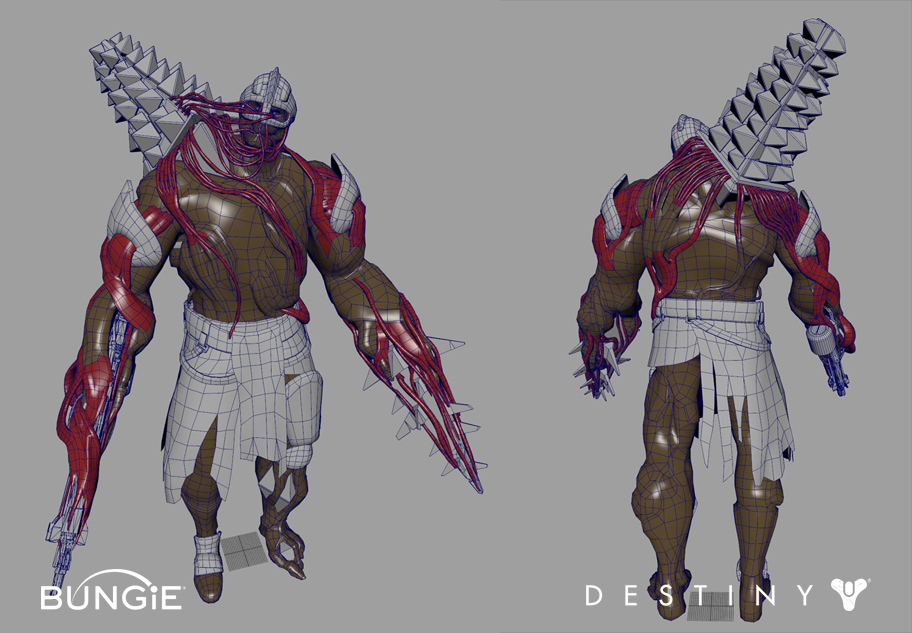 After getting the low-poly model in game, it was time to add the finishing touches. I finished authoring the textures in Photoshop and also set up the shaders (which control how the materials that the mutant Iron Lords were made of look). Lastly, Shiek Wang had me add some additional SIVA tumor growths on different parts of the body to break up the silhouette even more. I used vertex animation to make the wires that stick out of them squirm around, which really upped the creepy factor. 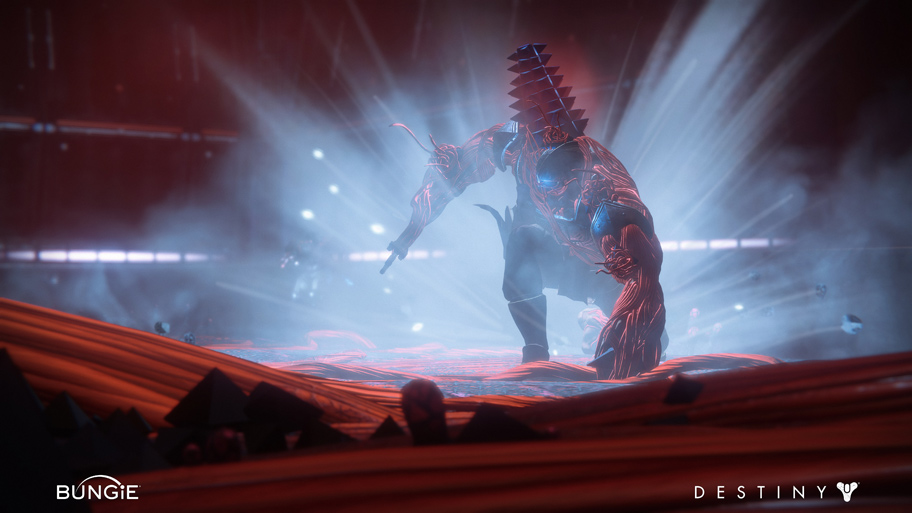 Several other people also contributed to the look of the final character. Technical Artist Robert Forsberg did a final skinning pass on the character so that it would deform nicely. , and he set up the cloth simulation with help from Technical Artist Micah Zahm. VFX Artist Lindsay Ruiz created the many FX associated with the Mutant Iron Lords, like their protective shield. Lighting Artist Andrew Baker set up the character lighting to set the right mood and accentuate some of the important features like his eyes, armor, and monolith.

To give credit where credit is due, all the people I’ve mentioned, as well as many more – such as the producers, leads, and everyone else who kept the whole operation running smoothly – were all instrumental in bringing this one character to life.

I hope you’ve enjoyed this account of the creation of the mutant Iron Lords. You’ve made it all the way to the end of what turned out to be a longer chronicle than I planned to write. Thank you for reading!