This week at Bungie we revealed The Dawning.

Since our last blast of weekly blog fodder, we’ve said much about what is afoot in Destiny. It was a great way to spend a weekend. We met thousands of awesome players and sent them roaring around two new racetracks. We showed you how the Guardians will celebrate a season of giving and healthy competition. We breathed deep the magical air of Anaheim, California.

Sparrow Racing is making a comeback, under the direction of Amanda Holliday. Strikes are about to become a scored event, presided over by Commander Zavala. Some of those scored Strikes have been redesigned to feature SIVA infestations. This event will bestow upon you many gifts. There are new gear sets, new Exotics Weapons, and an old favorite to help you break the winter ice. Those are just a few of the new seasonal updates you’ll find in the Tower.

All of this is wrapped up and packaged in a new Record Book. Got Rise of Iron? It will be waiting for you. Don’t got Rise of Iron? It’s not too late to join Lord Saladin on his adventure to avenge the Iron Lords.

The games begin on December 13th. They end on January 3rd. Let’s race toward the finish line of 2016 together, and welcome 2017 with some striking new ways to upgrade our characters.

On Tuesday, it will be time to let it snow.

The last time we turned the Crucible over to Amanda Holliday, our old friends at Rooster Teeth had a grand old time trading paint and talking trash. Next week, we’ll put a Bounty on our own heads and invite them to come and claim it – if they can. This is a race, but it’s also a battle. This is challenge. This is a duel.

Three of their racers will battle three of ours. The first Sparrow to cross the finish line first will claim victory for their team. You’ll be invited to watch on Twitch.

Did we mention new gear for The Dawning? Bungie Artists have been forging new armor behind the scenes to help you equip something a little more festive. Now that you’ve caught a glimpse of the new gear, we can show you high-resolution pixels from the drawing board.

Click on the images you’ll find below to visit their portfolios, and see more of their work.

Ian McIntosh has visions of new wares for your wish list, be you a Warlock… 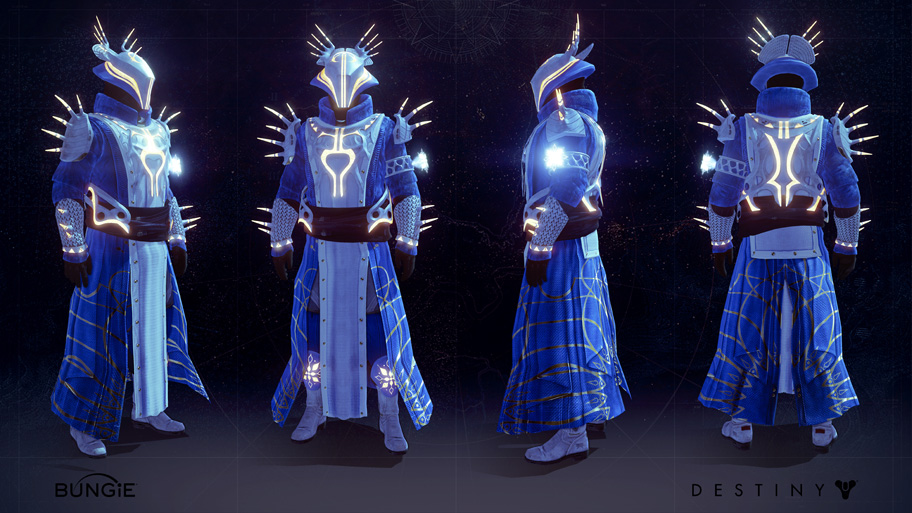 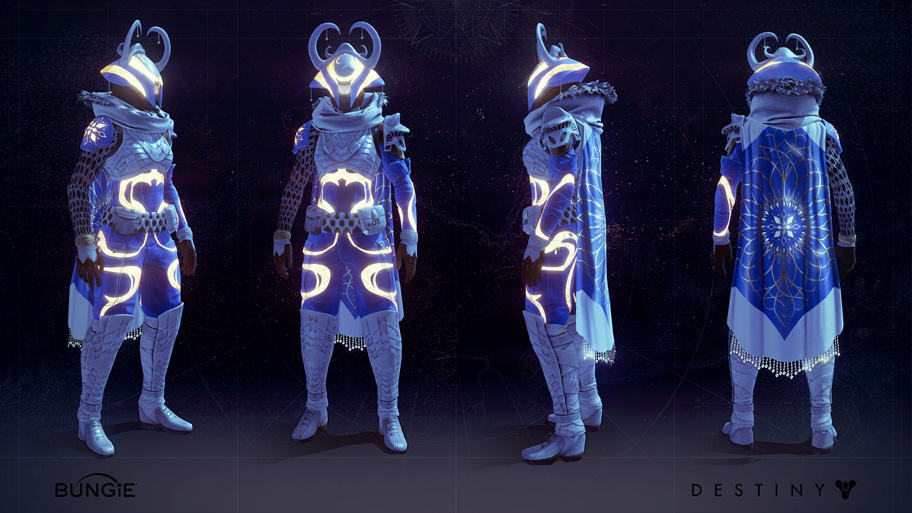 What you won’t find in Ian’s portfolio is what we created for the Titan. 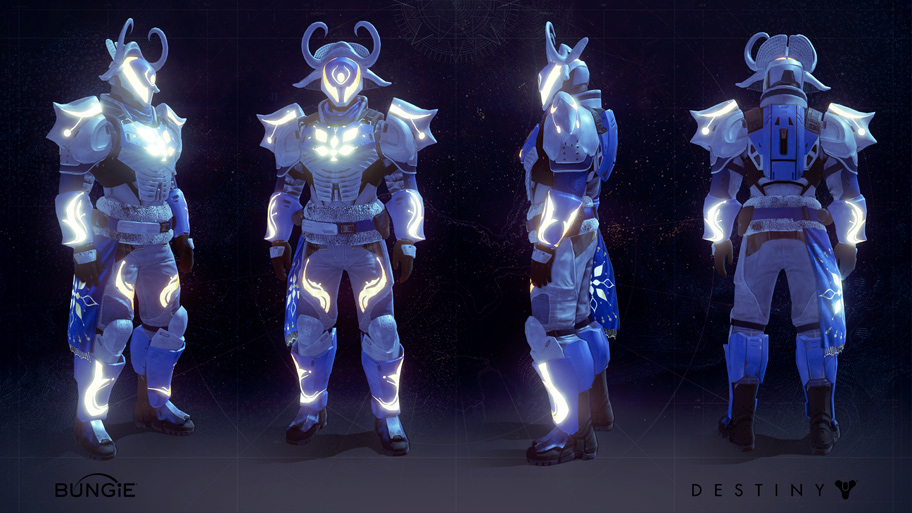 For the Titan set of armor, we relied on our new friends at High Moon Studios. Specifically, you Titans will have Priscilla Landerer to credit for your new gear. Thanks for the team effort, High Moon. We’re looking forward to a bright future of further collaboration.

And, we’re looking forward to seeing the rest of you in your new Dawning armor.

Like every deployment of new content, an update like The Dawning gets a number. This one is Update 2.5.0. It’s another step in the path of evolution. 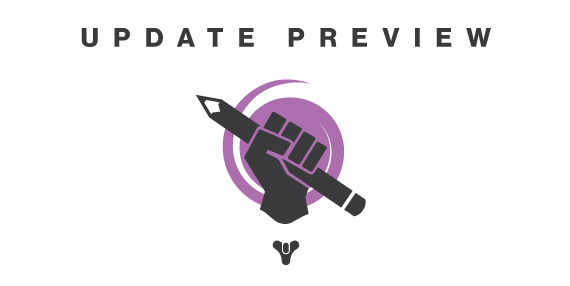 When we update the game, your friendly neighborhood Community Manager works with the development team to collect, collate, and post Patch Notes that document all changes and new features. Today, Cozmo wanted to share with you a preview of some of those bullet points.

Cozmo: One of the things I love about my job is looking for good feedback on the Internet and passing it along to the team. It’s always a great moment when we can deliver solutions for some of the things you’ve been talking about. There will be plenty to read on Tuesday, but here are some things I’m excited to talk about right now.

The completionist among you will be happy to hear that we have fixed the issue keeping you from your final Trophy/Achievement in Rise of Iron. If you haven’t already attuned all of the ROI Artifacts, now is the perfect chance to go do it as you will also get the Sigil of the Young Wolf Emblem.

Everyone has been on the hunt for Skeleton Keys to get their hands on that sweet Strike specific loot. We’re increasing your chances to see them drop and guaranteeing you 1 per account for your first Nightfall clear every week.

If you haven’t already heard, we’re going to save you some time by automatically converting Uncommon Engrams to materials. Once you are level 40, you don’t have much use for Greens. We’re going to go ahead and dismantle them on pickup for you after you reach max level.

A lot of Guardians have found themselves short on Passage Coins when Trials of Osiris goes live. Brother Vance will now offer them in exchange for Motes of Light.

The Gunsmith will now be very popular with Guardians who dismantled their Stillpiercer, Immobius, or Susanoo. You can repurchase these weapons from him for Legendary Marks.

All of this and more will be available for download on Tuesday, December 13th, at 10AM Pacific. Once you’ve installed the Update, you’ll be cleared for landing in the Tower, where you can begin your experience with The Dawning.

As new content flows from us to you, Destiny Player Support is always at the ready to provide the information you need and answer the questions you may have.

In preparation for The Dawning, Nightfall Activities will be unavailable to players on PlayStation 4 and Xbox One from 1:00 AM Pacific (9:00 UTC) through the release of Destiny Update 2.5.0 on Dec. 13th, 2016. This restriction has been put in place to prevent players from entering a state where changes to Skeleton Key Rewards introduced in Update 2.5.0 would not be available until the following Weekly Reset.

Attempting to launch a Nightfall Activity will result in Error Code: Honeydew. Destiny Player Support will be posting reminders through @BungieHelp throughout the weekend, with an additional in-game message to communicate this information.

Players will regain access immediately after logging into Destiny after accepting Update 2.5.0.

Once Destiny Update 2.5.0 has been released, the Destiny: Rise of Iron Known Issues thread will be updated to reflect all resolved issues. The following issues will not be addressed by Update 2.5.0.

We are continuing to investigate these issues, and are looking into options to address them with a future Destiny Update. If you are encountering either of these issues, please post a report to the #Help forum.

With Finesse and Speed

With the upcoming return of SRL, the “With Finesse and Speed” Quest must be completed by eligible PlayStation 4 players prior to accepting Update 2.5.0 to earn the EV-42 NIGHTSTEED Sparrow. If this Quest is not completed by this time, it will be automatically removed from the Progress tab of the Character Inventory.

Stay tuned to help.bungie.net for all help articles related to the Dawning, and the return of SRL.

Center of the Maze

When he’s not gathering up Patch Notes, your Community Manager is watching a lot of videos. It’s time to see which ones he liked the best.

Cozmo: More movies are locked and loaded. Emblems are ready to be delivered to the victors. Let’s do this thing. This week, we have some great Montages lined up for you, as well as an impressive Sparrow feat just before the races begin. As always, if you would like your shot at winning MOTW, the Creations page is open for business.

If we saw you at PSX, thanks for making that show awesome. It was great to hear your stories and watch you boost through the gates. Let’s do it again next week.

Once The Dawning is live, we'll challenge @RoosterTeeth in the ways of Sparrow Racing.https://t.co/fzTNpDDAMX pic.twitter.com/Erol6Ll5wa