This week at Bungie we’re planning a monument to all of your wins.

Even before our old friend Cayde revealed that your stuff (but, more importantly, his stuff) would soon fall prey to the Red Legion, we let you know that we were going to honor our veteran players who join us again in Destiny 2. Today, we’re going to shine a little light on what you can expect if you count yourself among those ranks.

We say a little light, because we have competing goals to contend with on this subject. Some of the ways in which we’ll tip our hat to your legacy in Destiny 2, and some of the ways you’ll be able to show all the young pups that you’d become legend long before they were ever reborn in the Cosmodrome, are best left for you to experience for yourself. Others are little touches that will fall snuggly into the realm of “you just had to be there.” We’re not going to spoil them for you right here and right now.

On the other hand, we do have a handful of emblematic accomplishments that could compel you to tie up some loose ends this summer. We’d hate to have you look back on this time once Destiny 2 launches and wonder why we just didn’t let you know that if you’d just done that one last thing prior to August 1st, 2017, you’d have one more memento to add to your visible Destiny 1-era accomplishments in Destiny 2.

In the spirit of saving some small, but hopefully emotionally impactful surprises for you to experience first-hand in Destiny 2, and in the interest of arming you with the information you need to form your plan of attack over the next few months, here are seven Destiny 1 gameplay accomplishments that we’ll be carrying over into Destiny 2. 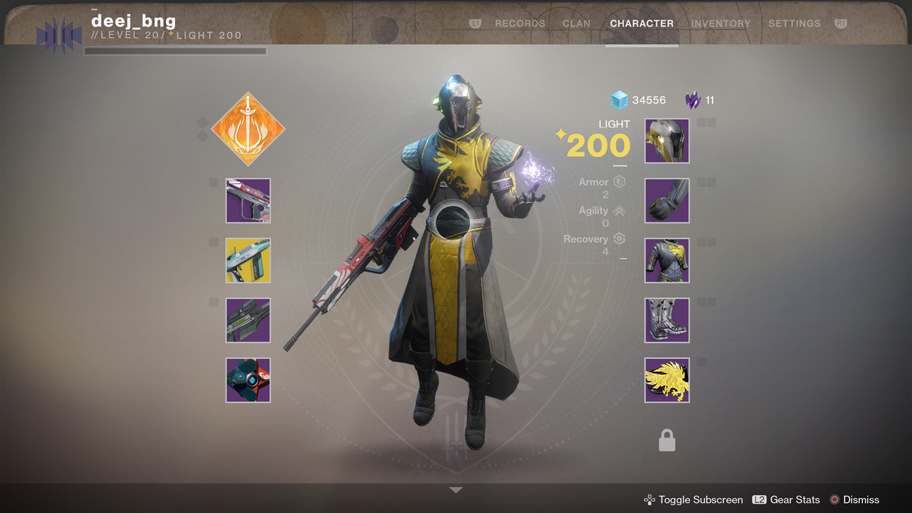 All values and statistics for illustration purposes only

In Destiny 2, the real estate just above your Guardian in the character screen is being commandeered to reflect the design of your currently equipped emblem. Emblems will still be visible in orbit while you’re forming your Fireteam, as you would expect, as well. If this sort of personal touch is the type of thing that floats your boat, then you’ll want to pay close attention to the selection of emblems below, and the things you’ll need to accomplish in order to add them to your new collection.

Fair warning for those of you who joined us in progress: Some of these emblems have been reserved for Guardians who stood together during specific, triumphant moments in time. In the literal sense of the word, the four emblems that fall into that category are strictly about commemorating and respecting the deeds of those who were there with us at the beginning of our first and second year of adventures. Two, however, are still actively achievable as part of the Age of Triumph record book, and one is tied directly to your still malleable Grimoire score.

We’ll be tracking the deeds associated with these rewards until August 1, 2017. After that, the data will be frozen in time so we can begin the migration process for the launch of Destiny 2.

You completed a Moment of Triumph during Destiny’s first year.

You completed all 10 Moments of Triumph during Destiny’s first year.

You owned The Taken King and completed a Moment of Triumph during Destiny’s second year.

You owned The Taken King and completed all 8 Moments of Triumph during Destiny’s second year.

You owned Rise of Iron and reached Rank 2 in the Age of Triumph record book.

You owned Rise of Iron and reached Rank 7 in the Age of Triumph record book.

Your achieved a Grimoire score of over 5,000 in Destiny 1.

Whether you’ve been with us from the very beginning and failed to spend your Strange Coins on Gjallarhorn in week 2, rose up for the first time to throw shade at Oryx deep within his creepy loot-filled fortress, or took your first steps in the snow of Old Russia after hearing the howls of Lord Saladin’s wolfpack, it has been our honor to host you in our world. We’re looking forward to our next big adventure together this September, but before we get there, we have some moments to forecast before the sequel drops.

Track these dates below. They may impact the way you remember the past, spend time in the present, or decorate yourself in the future.

Securing Your Age of Triumph Shirt

You have until August 1, 2017 to reach Rank 7 and unlock the discounted offer to claim your Age of Triumph Shirt. While they will not be their last occurrences, you might need to complete some of these activities to be counted in your Age of Triumph Record Book.

Destiny 2 is rapidly approaching, like a sneak attack that’s just about to crest the horizon. This means that our two competitive end game experiences will be going into hibernation before reemerging to spread their beautiful wings in unexpected ways in Destiny 2.

If you fancy yourself forged in the fires of the Crucible, you’ll want to mark these dates:

Yup! That snake-faced bastard will still make his weekend appearances in a location chosen for him. His will, after all, is not his own.

They are the men and women of Destiny Player Support. They keep the Internet safe for action and adventure. They lead an army of community volunteers in the fight against game-crashing bugs. One of them shaved his face baby smooth this week due to a near-fatal trimming accident.

In preparation for the Destiny 2 Beta, Destiny Servers will be taken offline for maintenance.

Players will be unable to sign in to Destiny servers for the duration of this maintenance.

Additionally, some Bungie.net and Destiny Companion features will be unavailable. For all vital information about server maintenance, please see this Help Article. If you experience any issues signing in once maintenance has completed, please post a report to the #Help forum.

In preparation for Destiny 2, the Destiny server queue has been enabled in the event that the population exceeds the capacity of our data center. This queue will only impact players attempting to sign in, and will not affect players attempting to launch into activities or social spaces. Leading up to the Destiny 2 Beta and after the launch of Destiny 2, we expect players may experience this queue during times of high activity or maintenance periods.

In the coming weeks, Destiny Player Support will be publishing a FAQ to help.bungie.net to explain this feature in depth and answer any questions you may have. Stay tuned to @BungieHelp for further announcements.

If you’ve ever posted a report to the #Help forum, you may have noticed a few members bearing the Mentor badge. These volunteers frequent the forum sharing articles from Help.bungie.net, communications posted by @BungieHelp, or other official answers posted by BNGHelp accounts.

Through many helpful interactions in the forums, this member has aligned perfectly with the mission statement of the Welcoming Committee, and has earned a spot on their Fireteam.

Leading up to the Destiny 2 Beta and Destiny 2 Launch, Destiny Player Support will be enlisting more recruits to the roster sourced directly from our forums. If you see a Mentor in the wild, show them your favorite emote. We can’t thank them enough for their dedication to lending a #Helping hand.

Last week, our community manager was in the thundering crowds to tell the tale of E3. This week, he’s turning mortal gamers into invincible heroes. Let’s take a look at who caught his eye.

Cozmo: Your next target is GernaderJake. He’ll be on the run somewhere in the State of California. You have two options: find him and defeat him, or stand with him and defeat his enemies. As long as you are on the winning side, you will redeem yourself.

Seek out GernaderJake to earn your Sign of Opposing Will. Do this and your Emblem will arrive in your Collection sometime the following week. If you have any other questions check out our Bungie Bounty FAQ.

Cozmo: We are back from E3 and it’s time to harvest the movies. They have been growing for weeks and are now ripe for the picking. We picked three fine selections for you and we’ll be sending Emblems to the creators as a small token to recognize their achievement. If you want your shot at the title, submit your video to the Creations page. Let’s take a look at the fruits of your labor.

With all these future moments to report, we also need to take a moment and thank the Destiny community for another amazing E3. This year, the super-objective for our mission to Los Angeles was to give more people a chance to fire their first shots in the Destiny 2 sandbox. You answered our invitation in droves. Every morning, when the doors swung wide, the ground shook beneath your inbound stampede. You filled our lines to their capacity for the day in a matter of moments and created an interesting traffic challenge for the convention staff in the hall.

We wouldn’t have it any other way. Thank you, as always, for your passion and your urgency to tackle new challenges. You never fail to remind us why we create these experiences.

Sorry if we didn’t have the chance to meet all of you. E3 has its own demands. If you didn’t find your moment to play, we hope we’ll see you in the Beta, now only three short weeks away.

Is this real life?

The launch of Destiny 2 is on rapid approach. There are many more boxes to check before that can happen. In the coming weeks, we’ll talk to you more about your Clans and where else you can visit us before the Red Legion pays us all a fateful visit.

p.s. Right this very minute, and for the next week, Guardians are fighting on Earth and beyond to make the world a better place. Join them… on the GuardianCon stream.

This week at Bungie, we're planning a monument to all your wins.https://t.co/7eim25tBfz pic.twitter.com/WgPEsUyx9C