This will be a page that gets updated periodically and is currently being updated with information.

Seasons: There will be 4 Seasons in Year One of Destiny 2. All seasons have their own unique theme, include new seasonal loot, at least one event like The Dawning, sandbox updates with weapon tuning, and more. (Seasons last approximately 3 months) 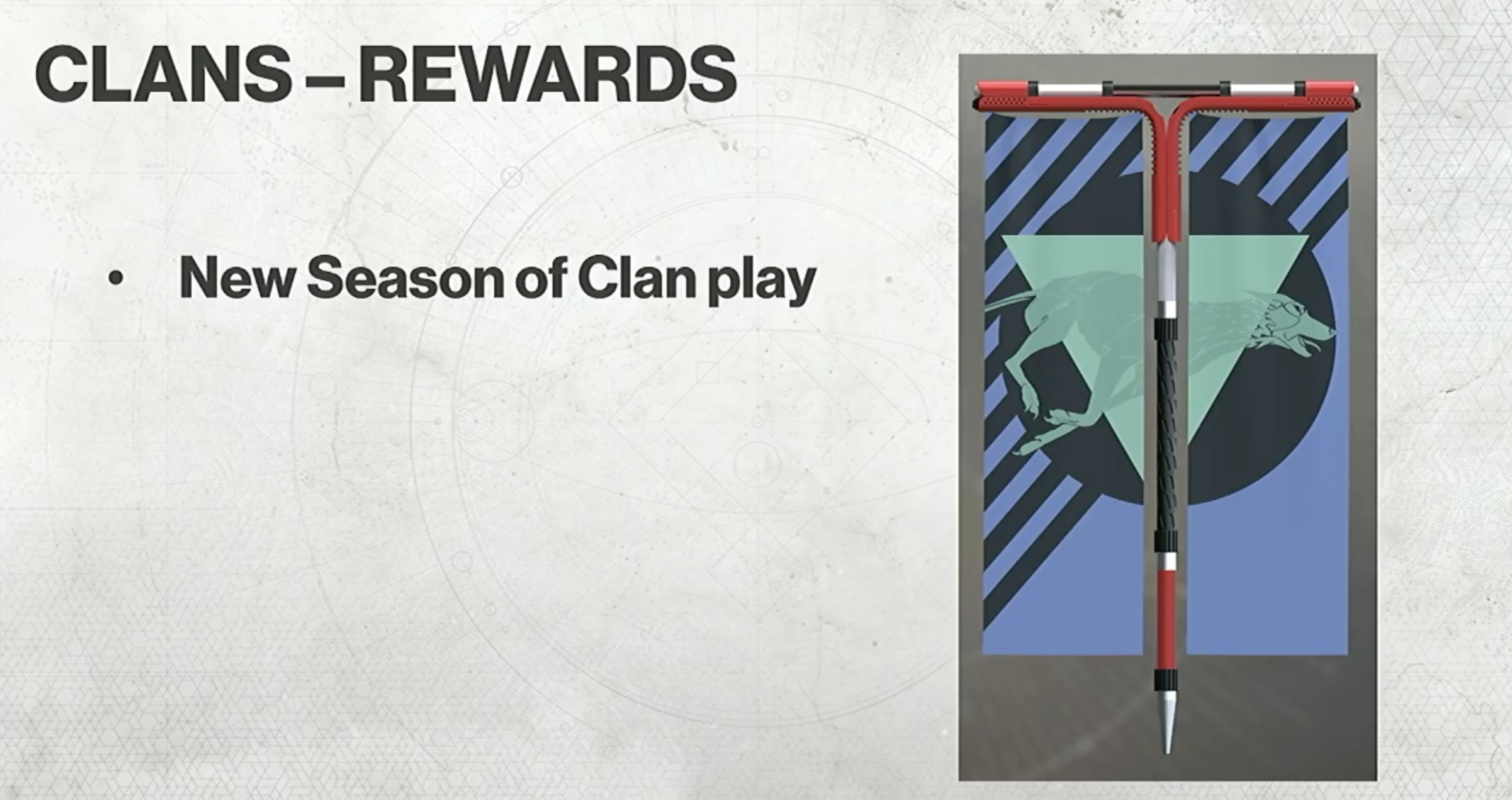 Clans: Before Season 2 begins there will be a ritual called ‘Clarion Call’ where clan members can earn double XP in activities. The upcoming Clarion Call requires Clan Collaboration meaning you must complete activities with clan mates to earn double XP, not every Clarion Call will require Clan Collaboration. This is to help bring your clan together, help you earn items quicker, and to be able to reach clan level 6 before Season 2. All clans that reach rank 6 before Season 2 will earn a new special staff that shows your clan reached clan level 6 and completed season 1 (the red staff shown in image is the reward Clans can earn). All clans ranks reset in new seasons. Clan engrams will update with the new seasons loot pool. Each new clan level in a new season will have new perks that are based around the seasons theme.

The Dawning Event: Season 2 will feature The Dawning event, expected to launch sometime in Winter 2017. There will be some exclusive items for The Dawning such as armor sets, exotic ships, and more. The Dawning season will also have some special activities like snowballs (which extend beyond the decorated tower and you’ll even be able to throw snowballs at enemies) and Ice Hockey will be enabled to play during Season 2.

Iron Banner: Season 2 will bring some new and much-needed changes coming to Iron Banner. Some of the new changes are that players will be able to purchase weapons and armor with Iron Banner Tokens and Legendary Shards. There will also be new weapons with new perks added each season, armor, and new seasonal armor ornaments that are available by finishing objectives. (There will be one more Iron Banner event before Season 2 but will not have the new changes)

Season 2 Trials of the Nine Weapons

Trials of the Nine will have redesigned weapons with a new visual look and perks, armor, and armor ornaments. There will also be a new crucible map.

Faction Rally will return in future seasons with a new set of items including armor, weapons with new perks, and a new set of victory weapons for the winning faction. (adding images soon)

Currently updating and adding more info to this section…