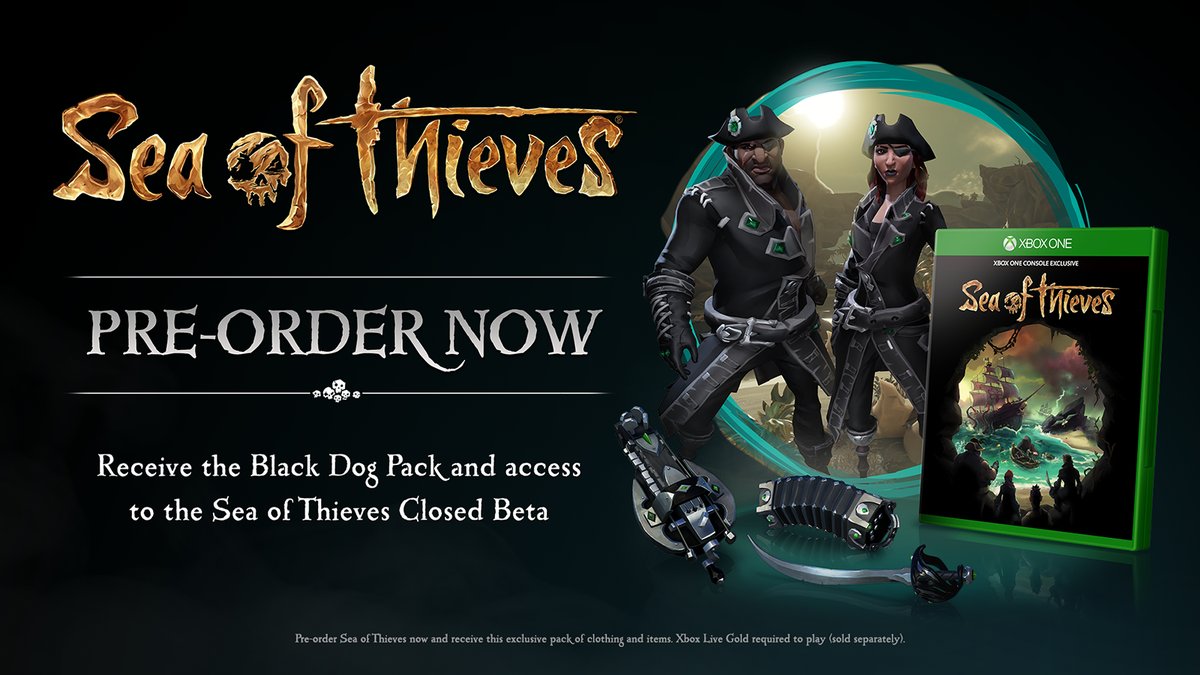 Learn more about Sea of Thieves on the Official Website

Pre-Order today! Embark on a shared-world adventure and live the essential pirate life: sailing together, hunting treasure and becoming legends! 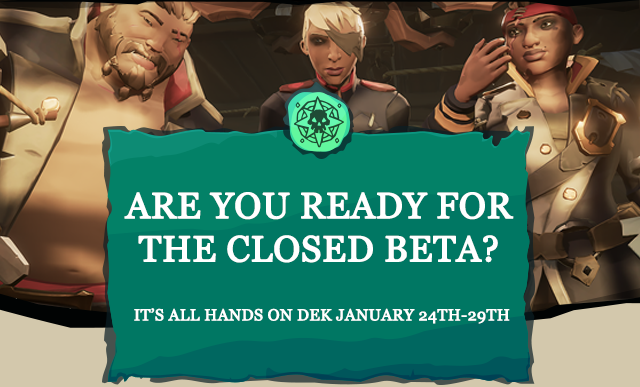 Update: we’re extending the #SeaOfThieves Closed Beta by two days as we know some players are having a rocky time getting into the game. We’ve posted a Closed Beta Studio Update here: http://bit.ly/SoTCBUpdate (view tweet by seaofthieves)

It’s the news everyone’s been waiting for – the Sea of Thieves Closed Beta will run from January 24th-29th, giving pirates a full five days of sailing, shanties and shenanigans. We’ve crafted a bespoke experience for Closed Beta players that offers a true taste of the pirate life and a great chance to get your sea legs ahead of our full release on March 20th. So get your calendars out and write these dates in a thick, permanent marker pen!

[Q]: When will the Closed Beta be running?

[A]: The Closed Beta will open at 12pm GMT on Wednesday 24th January and will run until 8am GMT on Monday 29th January. For those in other time zones, this works out as:

7am on Wednesday 24th January to 3am on Monday 29th January

6am on Wednesday 24th January to 2am on Monday 29th January

4am on Wednesday 24th January to 12am on Monday 29th January

1pm on Wednesday 24th January to 9am on Monday 29th January

[Q]: How can I get access to the Closed Beta?

[A]: The Closed Beta will be accessible to Founders (eligible players who joined the Sea of Thieves Insider Programme before December 1st 2017) and players who have pre-ordered the game.

If you pre-ordered the game through the Xbox or Windows Store, the game will appear in your games library 24 hours before the Closed Beta begins. You will need to download and install it.

If you pre-ordered the game through a retailer, you will need to redeem the code for the Black Dog cosmetic pack. Once you have done this, the game will appear in your games library 24 hours before the Closed Beta begins. You will need to download and install the game.

If the game does not appear in your games library, navigate to the Store, search for Sea of Thieves and install from there.

Having trouble? A step-by-step guide to installing the Closed Beta on Xbox One and Windows 10 PC (whether you pre-ordered or you’re a Founder) can be found on the dedicated installation support page.

If you haven’t pre-ordered the game yet but you want to get into the Closed Beta, you can pre-order Sea of Thieves here.

[Q]: What content will be available in the Closed Beta?

[A]: We’ve crafted a bespoke experience for Closed Beta players that has been designed to give everyone a taste of the pirate life that they can expect in the full version of the game at release. We won’t be testing the full game during the Closed Beta phase: we want to keep a good selection of things up our sleeves for players to discover at launch.

[Q]: Can I stream or capture my play sessions in the Closed Beta?

[A]: Yes. The Closed Beta will not be covered by an NDA (Non-Disclosure Agreement) so you can stream, capture, clip and screenshot to your heart’s content. If you do create content, make sure you tag it “Sea of Thieves” (or use the #SeaOfThieves hashtag) so we can see it too – we’ll also be sharing some of our favourites on our social channels and website. We are incredibly excited to see the content you create and the stories you tell!

We’re looking forward to sailing with you on the Sea of Thieves! Stay in touch with us via our social channels for updates and dive into our Forums to join the conversation – we’d love to hear what you think. See you out there, pirates!

Preparing to launch yourself into the #SeaOfThieves Closed Beta? We've updated our FAQ with installation instructions. Have a look through and make sure you are ready to set sail: https://t.co/JkwK2w9yNr pic.twitter.com/JuiZ6U6Z7y

Watch the latest Sea of Thieves Videos Released on YouTube

This page may be updated with more/new information.