This week at Bungie, we deployed an update to Destiny 2.

Update 1.1.2 went live on Tuesday, infusing the player experience with Armor Masterworks and Raid Mods. Rewards have been restructured for Leviathan and Eater of Worlds completions, too! For a full rundown on patch notes, make sure to sort through the bullets.

On Wednesday, part two of the Fall of Osiris webcomic series became available. Right here on Bungie.net, you can follow the continuation of the story.

We’ve also mapped the road ahead, plotting a course through the coming months with a full schedule of updates. Christopher Barrett provides commentary for upcoming changes, with some insight as to what you can expect for the future of Destiny 2. Take a peek, and sound off with your thoughts. Something you’ve been talking to us about might be on the list. 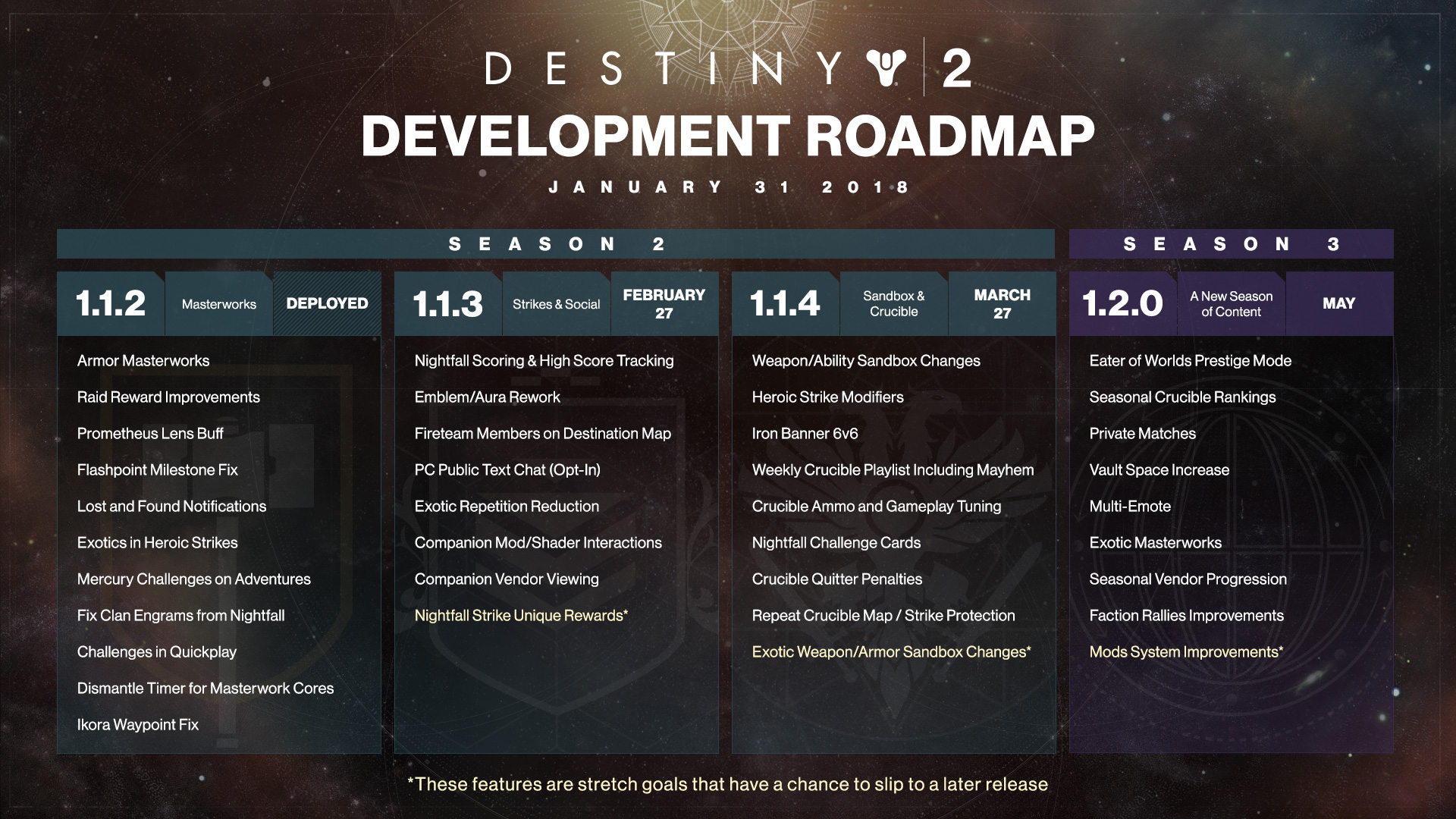 With all that has been said and shipped this week, we have many new questions to tackle. When’s the next Sandbox update? Have you heard our feedback about movement in Destiny 2? What about Shoulder Charge?

Read on if you want to know more.

On the Development Roadmap, we forecast one update that players have been talking about a lot. We’ve been gathering lots of feedback about the Destiny 2 Sandbox, and seeing it on a deployment schedule sparks more questions. Design Lead Josh Hamrick is here with the first of many rounds of answers.

Hamrick: Hello again!  We’ve been promising more details about our work on the Destiny 2 Sandbox, so here we are.

Before we get started I want to lend some context. The Sandbox Team is currently working on lots of updates for Destiny 2. Over the next several months, as those various delivery dates approach, there will be many visits from me or one of my teammates. Know that we’ll be chatting with you again and again to share more details with you as we acquire them. This meal will span many courses. Here’s the first…

We’ve begun playtesting a series of changes that you will have in your hands in the next few months. Sandbox is lovingly begun to refer to this series of changes as the “Go Fast Update.” These are the changes we are currently playtesting. They’re not guaranteed to ship, but the outlook is good at this point.

Our goals for this round are to provide individual players with more hero moments by increasing overall speed and mobility, increasing the amount of supers you charge to demolish your enemies, and increasing the frequency and impact of our most montage worthy power weapons, especially in the Crucible.

Finally, the Shoulder Charge changes that went in a couple of months ago have been fully reverted. Shoulder Charge’s movement utility was perceived as more valuable than its damage utility, which made it feel bad to actually hit someone with Shoulder Charge. The movement was effectively a “free” dodge.

The goal of the untargeted distance nerf was to discourage using the ability as a movement mode by making it only effective when using it against enemies. In retrospect, we think this change was a mistake and we’ve heard you all say the same. We believe there are a number of gameplay atoms like this that perform or are used differently than we expected but are thoroughly enjoyed nonetheless. In the future, we want to embrace the state of gameplay atoms like that and balance around it, not against it.

One final note that will be important to all the snipers out there. Many of you have rightfully complained that Snipers flinch too hard when you’re taking hits, especially as they are now power weapons. We have dug into this and found that somewhere along the way towards shipping D2, we acquired a bug that is preventing us from being able to successfully tune this to the values that we would all like. While the current batch of changes we are playtesting go a long way to bringing snipers back to where they should be, this bug will still prevent them from feeling perfect. That bug, which we are actively working on fixing, requires some deep changes to the art of each of the individual snipers in the game. That will take us a while to stomp out. We’ll get it fixed and pushed out to you as soon as we possibly can.

Like I mentioned, this is the first part in a series of Sandbox Updates that we hope you come to enjoy. As these changes continue to solidify, we’ll have more to say. The next items on our agenda after these changes include the mod system rework (which we plan to use to buff ability cooldowns) and the Exotic balance pass. We’re also continuing to evaluate Destiny 2’s weapon slot system and how all the different types of weapons in Destiny fit into the game, how they are being played, and what we can do to improve that experience.  Expect to hear more from us about that in a future update.

When downloading and installing updates, Destiny Player Support is on tap to keep you on course. From the moment we open the floodgates after a maintenance period, associates on the team begin monitoring the forums for rising issues.

With Destiny update 1.1.2, the amount of XP required to earn a rank up was changed from 160k XP to 120k XP. Shortly after deployment, an issue was discovered where the Bungie.net API was displaying incorrect XP gains and totals.

After communicating our findings, players continued to report odd XP earn rates in-game. Through quick investigation, an errant server flag was discovered in the live environment, which was throttling XP rewards. While our test teams had verified the incoming XP changes in a test environment, this did not properly reflect the player experience due to the missing flag.

The errant flag was immediately removed, and the issue was resolved. We would like to thank all players who reported the issue and provided screenshots/videos. If you experience any other oddities in XP gains, please post a report to the #Help forum detailing your experience.

Cozmo has been out a few days this week due to illness. That leaves it up to me this week to check out the Creations page in search for some inspiration. Some of the plays you’ll find below have me questioning which Exotics should be equipped for Iron Banner. Sit back, relax, and enjoy the show.

Movie of the Week: The Legend of Acrius

Winners, expect an awesome emblem in your Collection once the week is out. I’ll holler on Twitter once your prize is available.

What a week. Iron Banner is in full swing, Masterwork Armor is available to earn, and Raid Mods have been equipped around the world to approach raid encounters with new strategy. Next week, we’ll talk to the Raid Team about some of the next challenges they’ll deliver to make you feel more prestigious in the Eater of Worlds Raid Lair. We’ll also be providing details on the upcoming Crimson Days event, going live on February 13.

What’s been presented in the Development Roadmap will become available to all players of Destiny 2, and serve to pave the way to Season 3. At the start of the new season, Expansion 2 will also become available with its own Raid Lair and an assortment of new content. We have much to do between now and May, and we’ll keep you updated every step of the way.

This Week at Bungie, we deployed an update to Destiny 2.https://t.co/X93kHVbupf pic.twitter.com/9G74Ph18db