This week at Bungie, we witnessed New Monarchy continue their dynasty.

New Monarchy is celebrating in the Tower this week. They won their third Faction Rallies event in a row—the three-peat is real. Future War Cult remains winless, but they did narrowly edge out Dead Orbit for the second place slot.

Future War Cult will get another shot at getting their first win when the factions return to the Tower to compete again. Will Dead Orbit return to glory? Or will New Monarchy continue their dominance with a fourth straight win?

After the faction leaders pack up to leave the Tower, Saladin will be passing them in the Hanger as he makes his return. It’s time to relight the burning shield and prepare to battle your fellow Guardians.

Lord Saladin will have three featured weapons available for you to obtain directly from him. Here are his offerings: 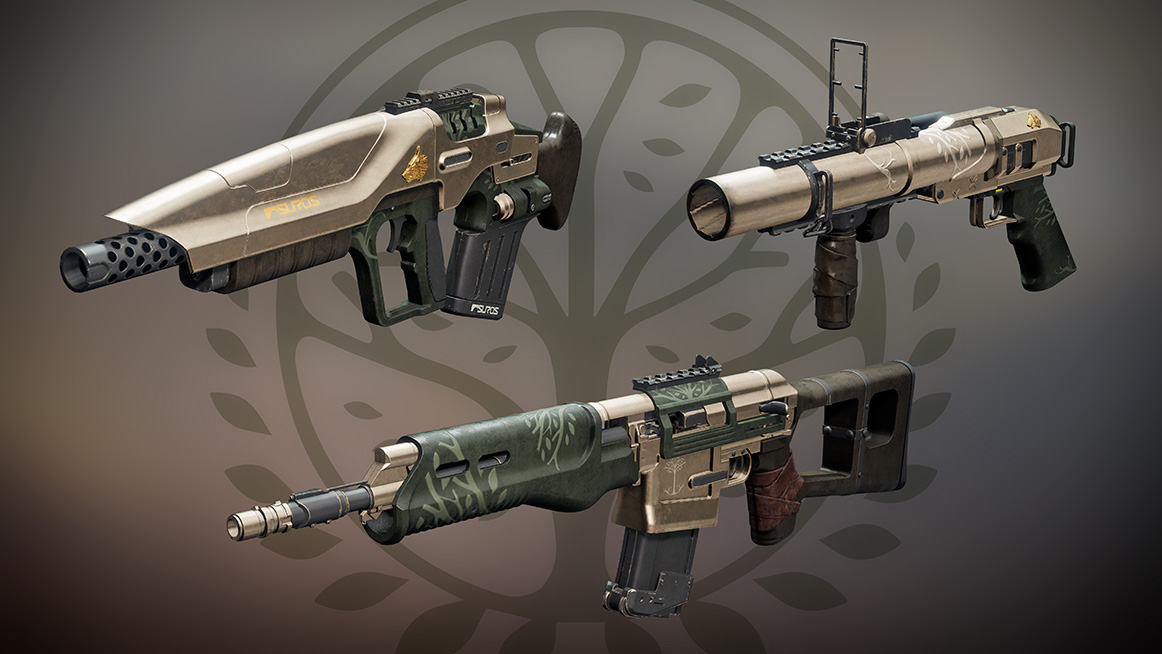 If you weren’t able to finish off the challenges required to unlock all of your ornaments during the last event, your progress will carry over. So start punching everyone you see to earn that chest ornament!

Changes are coming to Iron Banner and the Crucible. We’ll give you more specifics very soon

…Very soon, as in this section. The Crucible team has been working hard on a few updates to Guardian vs. Guardian action that the team plans to deliver in Update 1.1.4. We invited PvP Design Lead Derek Carroll to drop some knowledge on what they have in store for us.

Derek: The PvP team has been on fire these past few weeks, filling Update 1.1.4 with as much awesomeness as we can. Our beloved Test team is right there with us in the labs as we put the new content through its paces.

Iron Banner will channel that old-school Crucible in the style of the Iron Lords. We’ve made a number of tweaks to the gameplay besides increasing team sizes to 6v6:

Rumble will make its triumphant return, with no excuses, no complications, and absolutely no points for “assists”. You get a single point when you get a kill, just like in the golden age of video games. Oh, and this time, we increased the player count to eight.

These three modes will share a central location on the Crucible Director page, and rotate weekly to keep things fresh.  This Weekly Featured playlist will be home to gametypes that don’t necessarily fit into the existing Quickplay or Competitive playlists.

The Mode Formerly Known as “Doubles” is in its chrysalis, making a slow transition from what you played during Crimson Days to become a beautiful butterfly.  We love the way it played in Crimson Days, but felt like we could take it further and give it more polish and flexibility.  Once we lock that down, we’ll release it into the Weekly Featured rotating playlist with the other fun stuff. For now, we are unsure of a release date, but we’ll add it the Road Map when we are more certain of when it will land.

There are, of course, other cool features coming in 1.1.4 that will make everyone’s lives better (unless they’re habitual quitters), and we’ll be sure to talk more about them as launch day approaches.

Nightfall scoring went live on Tuesday. We’re monitoring the initial feedback on the changes. There were some common questions being asked about modifiers and score tiers. We asked the team working on these changes to clarify a few things.

Dev Team: Nightfall emblem variants have a chance to drop from Nightfall completions. It’s not related to challenges, and it’s not a guaranteed drop. For each variant, the chance increases from 0% to as high as 50% at specific score thresholds per variant. Currently, those thresholds are as follows:

Why aren’t those tiers visible in-game, and will they ever change?

Dev Team: We’re planning to adjust the score thresholds as we come to better understand what the community considers an impressive high score, and we don’t currently have a great way to display dynamic settings like that. Every week that a Nightfall returns, we may increase the Aura threshold based on community high scores from the previous week that Nightfall was active. We’ll do that based on some percentile of the community, potentially the top 10%. The current 60k threshold is based on internal playtests—we expect the community to be better than us, so it should be expected that threshold will increase the next time “Tree of Probabilities” comes around.

Why were base Nightfall modifiers removed?

Dev Team: The removal of the base modifiers from Nightfall is because we want to emphasize core combat in this initial release and let the community define the meta for a high-scoring Nightfall run. We can certainly revisit the modifiers in the future—they’re not dead and buried. Open to player feedback.

Note: We are currently investigating an issue where Heroic Mercury Adventure modifiers are not appearing for some players. This was not intentional, and we’ll update you on the status of the issue when we have more information.

We’re planning on reporting the top three fireteam high scores each week. Right now, Json#11981, Mercer#11929, and loaked#11981 are leading with a score of 222,873. Think you can best them before the reset? We’ll post the top scores next Tuesday after the reset.

We are always squashing bugs in the live game. You can read about a few issues we fixed with the 1.1.3 Update earlier this week. Some bugs are proving tougher to fix. If you are a raider, you may have experienced an issue we are currently investigating that causes some members of your fireteam to not spawn back in after a wipe. We haven’t solved the problem yet, but we asked Raid Test Lead John Guesnier to shed some light on this bug and some possible workarounds while we work on a fix.

John: Hello, I’m the Raids Test Lead for Destiny 2. I understand how frustrating it can be when players frequently encounter an issue in our raids. Nobody takes it more to heart than the Test team. Creating complex encounters that function as expected is the pinnacle of what the Raid team strives for in every release.

Our Raid team is made up of team members from all disciplines, and when an issue can be identified and fixed by scripting (what we call a content fix), we can make that fix without pulling too many resources from what we want to share with players next. When an issue needs to be fixed by an engineer (what we call a code fix), a solution becomes much more difficult to find, as it touches all systems within Destiny 2—not just a specific activity.

The issue where players do not respawn in the “Leviathan” raid is a memory issue due to the size and complexity of the activity, and it will require a code fix. It is caused when a fireteam splits up across large distances while others remain back and swap out their gear. This has seemed to be occurring more often in recent weeks because we have updated our loot tables in order to make the “Leviathan” raid a more rewarding experience, with more incentives to return to. We are still investigating a code fix for the problem.

In the meantime, you can avoid this issue by sticking together as a team while trying out your sweet new loot. We realize that this is not an acceptable fix, but we wanted to give you info on how you can try to mitigate the issue while we work on it. If you do happen to hit this issue even following those steps, then reequipping the armor set you had when you spawned into the activity may return your Guardian to action.

The following issues have been identified since the release of Destiny Update 1.1.3:

If you encounter any issues when playing Destiny 2, please post a report to the #Help forum detailing your experience

Do you like it better when dmg04 oversees Movie of the Week? Do I look like I care? Get back in there!

Moving on. If you aren’t familiar with how MOTW works, here is the gist of it. Every week, you can submit videos to the Creations page. We pick a few of our favorites, and the winners get an emblem. If you want to be one of said winners, submit your video. Make sure you list everyone who works on it in the description of the video, so we know who to send emblems to.

Now, without further ado, here are this week’s winners:

Movie of the Week: The Farm Piano Cover

I don’t know about you, but I still have some challenges to complete in Iron Banner. I’ve been looking forward to Saladin’s return to unlock some of those sweet, sweet ornaments.

Time flies. It’s already March, and 1.1.4 will be deployed before the end of the month. We’ll be talking more about it soon. We’ll also keep you up to date on the roadmap and other upcoming changes further down the line.

Apparently, I’ve been summoned to court next week. No, I’m not in any trouble. I have to do my civic duty as a juror. Point is, dmg04 will be writing your TWAB next week. Feel free to fill up his mentions with what you think he should write about.

See you in the Iron Banner.

This week at Bungie, we witnessed New Monarchy continue their dynasty.https://t.co/xhp5MKSiOT pic.twitter.com/kLUEojvOac