This week at Bungie, we’re watching the final Faction Rallies for Season 2 unfold.

Future War Cult has mobilized their faction in full force, in an effort to earn their first win since Destiny 2 introduced this ritual to the Tower. Their fingers are crossed, but the followers of New Monarchy could still pull off their fourth victory in a row.

Remember, this will be the last chance for players to earn Season 2 emblems and armor ornaments from their favorite faction leaders. You have through Tuesday, March 27, to add these to your inventory.

If you’d like to see what we’ve learned from this season, as well as our goals for Faction Rallies moving forward, make sure to check out last week’s commentary from the development team.

Update 1.1.3 introduced Nightfall Scoring and Challenge Cards to change the player experience. Update 1.1.4 brings unique rewards to sweeten each Nightfall Strike. Let’s take a look back to a quote published in February, covering the overall goal for Nightfall activities:

Barrett: Nightfall should be a challenging test that only the bravest Guardians dare face. Fireteams of any size should be able to participate, from organized clan groups to skilled solo players. Players should be able to determine their own challenge level, by going slow and steady or fast and wild, with elective modifiers to test the most hardcore veterans. Your final score will separate the best from the rest, and with high risk comes high reward. Each terrible villain that players face should have a very rare and powerful unique item, themed to them, that tumbles to the ground as they collapse into a pile of bones. Conquering Nightfall should be a badge of honor, with the best players able to show off their achievements with new dynamic emblems and exclusive auras.

One question in particular has been trending throughout the community since the “Nightfall Unique Rewards” bullet was featured on the roadmap: How do I earn these rewards?

These rewards have a chance to drop when you complete a Nightfall activity at any difficulty. You can increase your chances using Challenge Card modifiers to set higher personal best scores. Earning these items may take many attempts to receive a drop, as they are meant to be rare rewards.

Last week, we gathered feedback on how the community would like to discover these rewards – either through a quick tease here on the blog, or from those among you who wish to be the first to show off their newly found loot. We’ll be watching legends unfold as these rewards are earned by players, and hope many among you enjoy discovering these items via gameplay without being spoiled.

Crucible isn’t just getting updates to game modes to speed up gameplay. Starting in Destiny Update 1.1.4, the Competitive Playlists will also feature a quitter penalty. Per the dev team:

Because the Competitive playlist disables Join-In-Progress, leaving matches early (for any reason) can ruin people’s games. Starting in 1.1.4, we are adding a system that can issue temporary restrictions, 30 minutes in length, for habitual quitters.

Leaving a match early for any reason, from improper network settings to an idle time-out while getting the door for a food delivery, can result in a temporary restriction. If you’re entering the Competitive playlist, make sure you have a solid connection and the proper time to complete your matches.

On our side, we’re also increasing security measures to improve the Crucible environment as a whole.

Our security team informed us that they also have some changes going into Update 1.1.4. Because security is a pretty hush-hush subject, we can’t go into the details of what is changing. If cheaters know how our detection works, they can use that info to avoid it.

The changes we are rolling out in 1.1.4 are going to increase the speed that we can detect and punish cheaters. Keeping the Destiny 2 environment protected from bad actors is a priority for us. We continue to work to make sure cheaters feel the full wrath of the Banhammer. If you believe you’ve encountered someone who’s cheating, please see our Report Suspected Cheating contact form.

Our work isn’t done, we also have plans for more updates to security in the upcoming 1.2.0 update as well.

Patch notes have been collected, but we’re still applying some elbow grease to get everything in order. Here’s a quick sample of upcoming changes and fixes that you’ll see next Tuesday:

Stay tuned to Bungie.net on March 27 for a full list of patch notes associated with Update 1.1.4.

Update 1.1.4 is on approach. Please return your seat backs to their full upright position. Cabin lights are about to go dark, but Destiny Player Support will keep you up to speed until we’ve landed.

Destiny 2 services will be brought offline for maintenance. Update 1.1.4 will also become available upon maintenance completion. Please see below for the timeline of the maintenance window.

If you have any issues when downloading or installing Destiny Update 1.1.4, please post a report to the #Help forum detailing your experience.

Sometimes, it takes weeks to get the perfect shot. Waiting for the stars to align can feel like an eternity, but some have found they come together a bit more often than expected.

Runner up: Getting Lost  Runner up: Brought a knife to a Boss fight

If you’d like a chance to earn the Lens of Fate emblem, make sure to submit your video to the Creations page on Bungie.net and include #MOTW in your title.

Speaking with the Sandbox team, Update 1.1.4 had a few potential names thrown around in development. One team member in particular campaigned for it to be called the “Supercharged” update. To keep communications clear and set expectations about how all of the changes would feel together, it was ultimately decided that 1.1.4 would forever be referred to as the “Go Fast” update. From my time in playtests, I can really feel the name. The most important piece of this puzzle is how you, the player, will feel once it’s in your hands.

We’re excited to see what new loadouts will be used in PvE – potentially to rack up even higher scores in the Nightfall. Speaking of which, here are the top three fireteams from last week’s Nightfall, “A Garden World”: 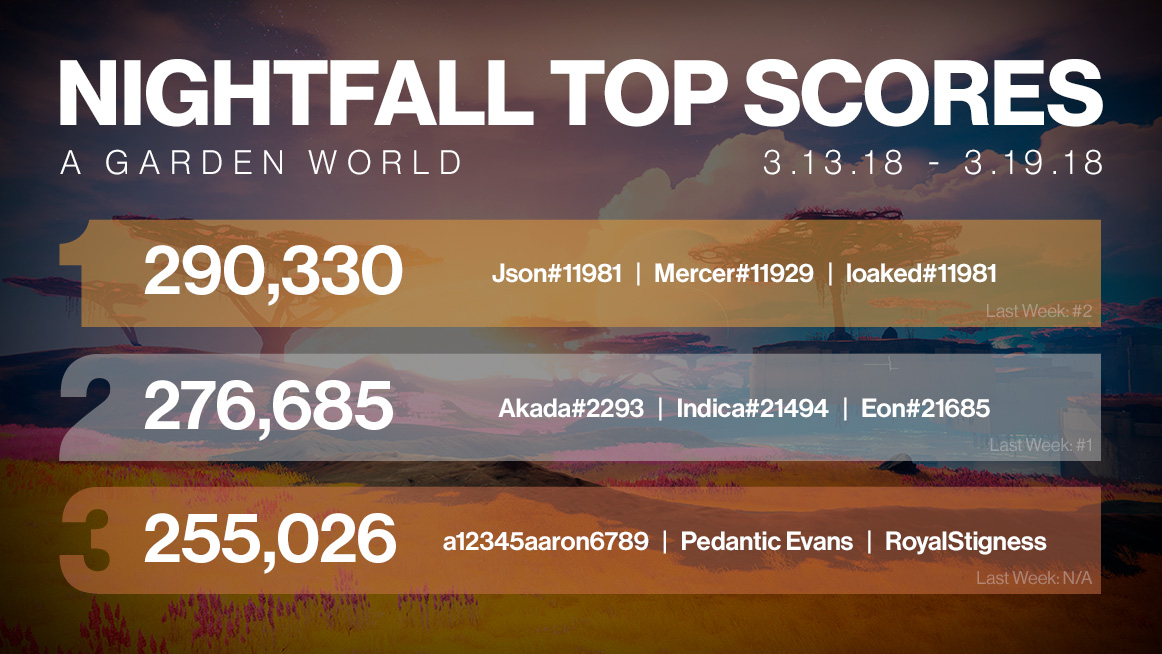 Have to admit, it’s always exiting to watch players crunch damage numbers when the sandbox evolves. Exotic weapons are up next in May, with some interesting changes for us to dive in to. More to come, once 1.1.4 has landed. See you next week.