by the Destiny Dev Team

As you know, we’ve been engaging with the Destiny community to pivot and improve every part of our Destiny 2 experience. This includes a commitment to the tone, story, and lore of Destiny both in and out of the game.

This week, I wanted to give a shout out to Destiny’s hard-working Narrative group, who has been collaborating with myself and the rest of the dev team on a whole bunch of new lore content that will be coming your way in the near (and in some cases, very near) future. While I can’t tell you everything we’ve been working on together, I’m happy to reveal that another (free) Destiny digital comic – Warmind – is headed your way this week, written by Mark Waid (Dr. Strange) and David Rodriguez (Warmind) and inked by Kris Anka (Runaways). I hope you enjoy reading it as much as I did. 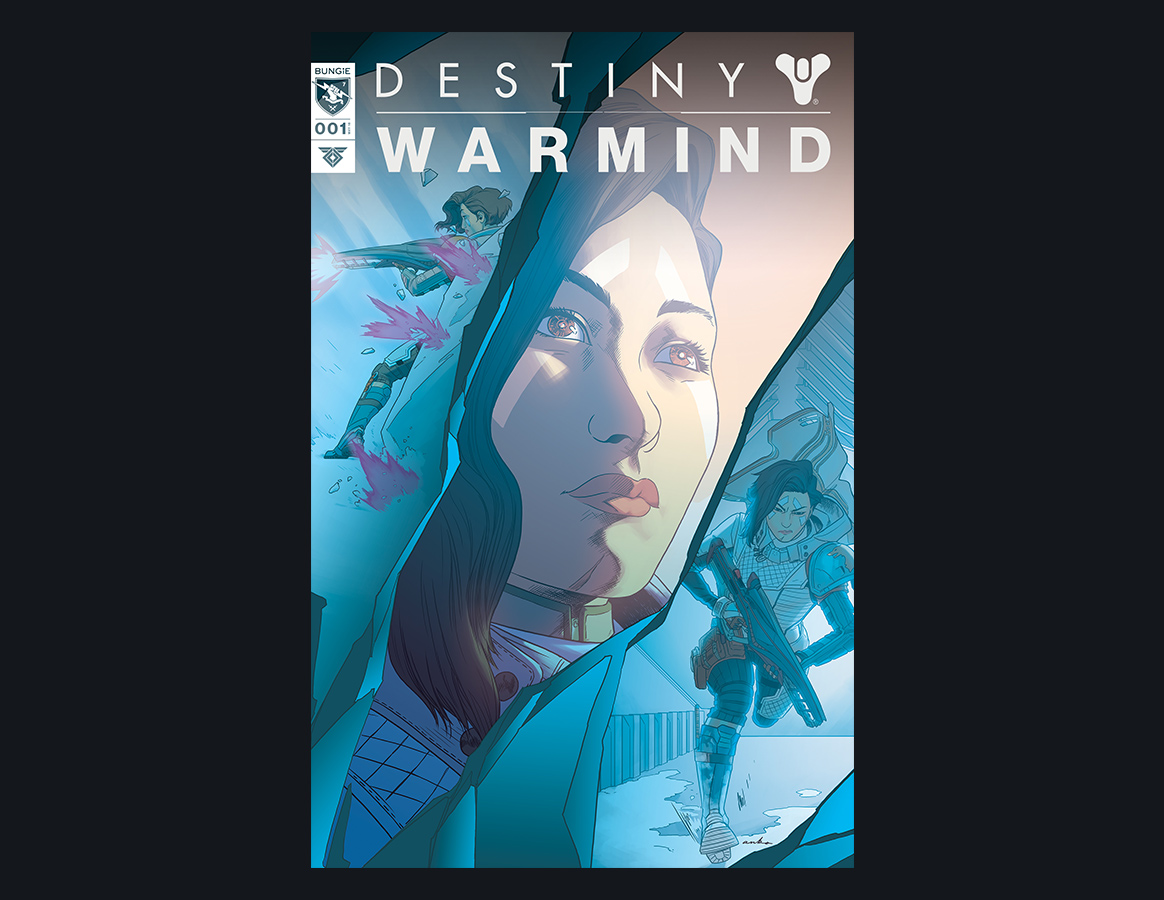 And if the week seems like a long wait, I’ve got more good news; you can join us in celebrating the upcoming launch of Destiny 2: Warmind with a few pieces of new and original Warmind Weblore, now available here.

[Editor’s note: Revised copy to accurately reflect the release date of the comic.]

“I don’t like it when you call me that.”

“What, ‘Ghost’? Oh, come now. We’ve been having this discussion for more than three centuries. Ghost is what you are, my friend. If you want a name so badly, choose one for yourself.”

“Maybe I will. Now that everyone’s gone back to the Tower and we’re still out here, I have plenty of time to consider what my name should be.”

“Can you open my file while you ponder the possibilities?”

“Thank you. Research Notes TK-48725.8. Data recovered from Freehold—Bray Landing. Kirren found an entire cache of intact data cores there. Brought them back just before the attack on the City.”

“It’s these little miracles that intrigue me so much… Fragments of memories, frozen in silicon and quartz, trapped in a moment that survives the end of a civilization, centuries of decay, and the predations of invading armies, only to be recovered and end up as flotsam of a second war. That this cache even managed to survive the Collapse is a wonder, and then the Red War? The probabilities of such an occurrence are…”

“Ahem. You’re rambling. Again. You said I should remind you.”

“Thank you. As I was saying, this data was recovered more than six months ago but is just now being decrypted—2.6 exabytes of documents and schematics have been decoded so far. At first glance, most of this was just the detritus of Bray’s work: review notes, payment records, memos. I did find some very interesting notes on a propulsion system design that I’ve already sent to Amanda, and there are some messages between the sisters that will illuminate Master Melivander’s work on the history of Clovis Bray.”

“But then I found something extraordinary. The records were fragmented—some files had been partially deleted—but there’s enough there to indicate that the Bray facility at Hellas Basin was larger than we previously thought.”

“The same. And while we know there was a BrayTech Futurescape there for promotional purposes— Bray even had an AI-led tour—all indications had been that if any research was done there, it was mostly for show: low-level projects creating improved cold-weather gear and the like.”

“But if these records are correct, the facility operated on a far larger scale. It could have been the site of the initial Warmind development. Perhaps even a core site for Rasputin itself. This could have been where the Warmind was born.”

“You got all that from some fragmented files? Is this going to be like the time you thought you’d identified a second Warmind? We spent a decade searching for Charlemagne’s vault.”

“I was correct about Charlemagne existing, just not about what it was. If we hadn’t done that research, we wouldn’t know anything about subminds.”

“Rahool needs to get his head out of his engrams. This is why Guardians look for fragments of the Golden Age! We are the descendants of a lost civilization. Only by understanding what was can we understand what we are now. How the world we know came to be. And each artifact we find helps us interpret what we already know. Adds layers. New identities. We are experimenting in the laboratory of time, testing each observation through a crucible of evidence.”

“Sometimes our conclusions change. And with each shift, we learn more of where we came from. The next shift in our perceptions? It may be on Mars.”

In the beginning, there were five.

Yul, the Honest Worm. Akka, the Worm of Secrets. Eir, the Keeper of Order. Ur, the Ever-Hunger. Xol, Will of the Thousands. And they were Virtuous.

In time, Yul spoke truth and bargained well. Its children escaped the Fundament and spread throughout the worlds. They followed the words of the Deep and brought low many agents of the Sky. They took, and a portion of all they took was returned to the Virtuous.

In time, Auryx learned Akka’s secret. That he was stronger than the gods. That they had given their power, and in giving, it was diminished. Auryx rose up and slew Akka. He took, and he grew strong with Akka’s power.

Behold my majesty. Behold my crushing might, my staggering size, my scales that shine with an oppressive gleam.

Behold my wings, which create winds that sweep through the stars.

Together, we have called life to Fundament, and made that life thrive. Protected it from extinction. They are our hosts, and we are their strength.

But we do not give. We take. For this is the struggle to exist. We are not immune. The weakest of us must give way to the stronger.

And Xol felt [fear|cunning], for it knew that Yul would in time turn its teeth to Xol.

But Akka was not the only one with a secret. Xol had a pact with a forgotten child, abandoned by its father.

The cursed one took a fraction of Xol’s power, and in return, Xol took the heart from the child, whose name had been struck from the World’s Grave. The orphan called life out of death, and fed that power to Xol.

Together, they would find a new world to rule.

And the five became three.

I, the child become [herald|death], record these words. They are not of the Sorrow. They are mine.

From “Collapse and Post-Collapse Incidents on Mars: An Examination of Ecological Changes in the Polar Regions,” by Master Reinhart, Cryptarch

We have detailed records of the expedition sent to the Moon to battle the alien race known as the Hive, the calamitous results of that assault, and the subsequent Lunar Interdiction that was lifted only after definitive evidence was found that the Interdiction had not restricted the Hive’s movements (Rahool et al., “The Great Disaster: From Burning Lake to the Hellmouth”).

However, there are indications that while that event may have been the Vanguard’s first engagement with the Hive, Earth’s Moon was not the first place the Hive made contact with Human settlements.

Golden Age records detail an extensive network of Clovis Bray structures on Mars. The vast city of Freehold served as the Bray headquarters, but ancient mass-transit lines that lead from the remains of Freehold across the planet reveal multiple other sites, including the Clovis Bray Health Center in Skyline and an extensive Futurescape near Core Terminus, in the Hellas Basin region.

It is the Futurescape facility that is of interest when considering the effects of ecological changes in the Collapse and post-Collapse eras. Although there are records that show that, just after the Traveler’s departure, the region had a mesothermal climate with an average temperature of 20°C, the region’s ecological zones today range from boreal to ice cap near the planetary pole, with harsh winds and a thick layer of ice that has made exploration in the region difficult.

What caused such a drastic change in the climate? If it were related to the cessation of Traveler energy during the Collapse, then we would have seen similar effects on other planets in the solar system, which we have not.

If we cannot look to the Traveler for causation, then we must contemplate other external factors. Recovered satellite data reveals that the climate change in the Hellas Basin region was too rapid to have resulted from long-term ecological damage, as it had on Earth in the pre-Traveler era. In fact, data from Warsat J54987F122S, which crashed and was recovered near Freehold, indicates that the climate change on Mars may have happened over a matter of mere days. However, this Warsat was heavily damaged during reentry, and the data may be suspect. Until we have a secondary source for corroboration, this is mere supposition.

Nonetheless, if we accept the data from J54987F122S, then we are looking at an external endothermic event, caused by artificial means, on a scale so massive that it altered the entire climate of the region.

Why would this have happened? Our only source is J54987F122S, and if it is to be believed, an invasion of unknown biological entities, including one of massive size, was detected in the region immediately before the event. Could this have been a Collapse-era attack with a weapon of unknown origin?

As of yet, Guardians have not reached Hellas Basin, and we have not had the resources for remote exploration. But if we did dig into the ice, what would we find?

Told you I remembered an article from the Mars research we were doing at Owl Sector. This could be what you’re looking for—if you can dig it out.

Reinhart goes on for a few hundred pages from here—I’ll send the whole thing to Jinju if you’re interested— but his conclusions are all wrong. Because he never mentions the ONE THING that could have done this.

There’s something in Hellas Basin. And you’re going to be the one to find it.

Before Warmind launches next week, our narrative team is pulling back the curtain to share some notes on the new story they are about to tell.https://t.co/ZRg6fVwGAh pic.twitter.com/rCTEiEfO2b