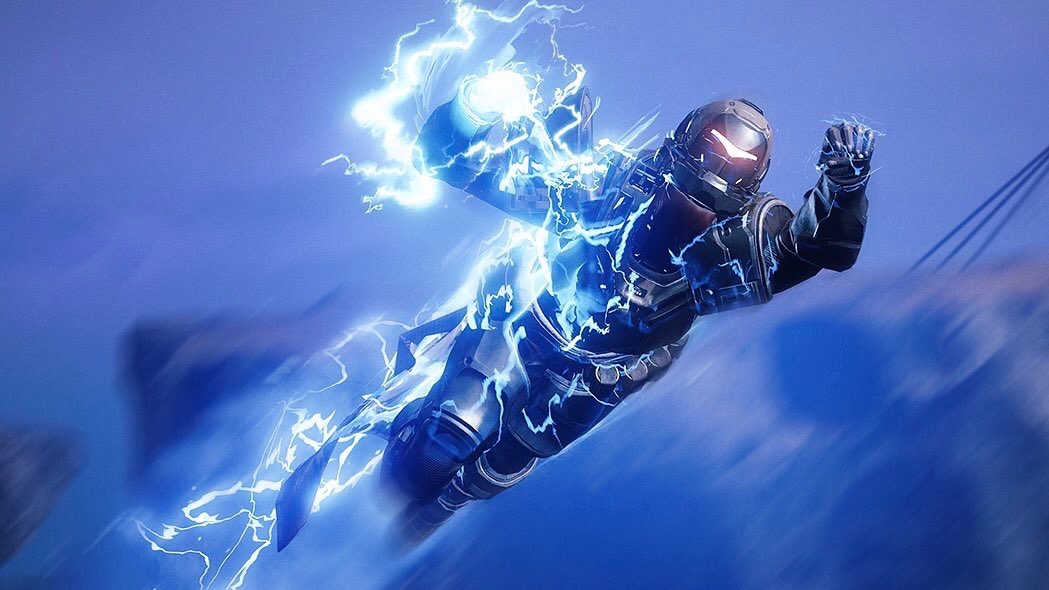 This week at Bungie, Lord Saladin is ornamenting the Guardians again.

Iron Banner is back, and not even for the last time in Season 3. There are matches to be won, ranks to earn, and rewards to collect. This is also your one and only chance to enjoy some 6v6 combat in the Destiny 2 Crucible – for one more week, at least.

Update 1.2.3 lands on Tuesday. With it, Quickplay will evolve to become a 6v6 engagement. Between now and then, our old friend the Iron Lord is the only one with the hookup.

That’s great, Bungie, but what about us solo players?

What about those of us who aren’t Crucible warriors, Bungie?

We have other news to report for those of you who prefer to focus your fire on the enemies of humanity.

Let’s dig in and take a look at everything in our immediate future.

When you light out into the wild in search of action and adventure, the fighting is all the sweeter when you have more ways to reap the rewards. In Update 1.2.3, we’re expanding on that experience with new bounties for Destiny 2. Senior Design Lead Tyson Green, who some suspect is actually the Cryptarch in his spare time, has some thoughts on what we want to accomplish with this addition to the player experience.

Tyson: With the original launch of Destiny, bounties provided a set of daily objectives that players could use to advance faction reputation or earn XP to level up their gear. These were removed to streamline the activity experience in Destiny 2 and reduce the number of “chores” that players felt compelled to complete every day. In retrospect, we realized that was an over-correction, and optional daily objectives to achieve specific goals are something we want to restore.

The bounties returning to Destiny 2 in Update 1.2.3 are a return to most of the properties of bounties in The Taken King. They will be obtained from a variety of vendors, they will generally award XP and faction reputation (though some will offer even better rewards), and can be redeemed “in the field” to immediately claim your rewards. In Forsaken, you may also see some bounties drop in the wild.

There are two new mechanics. Bounties will expire if left uncompleted, and acquiring them will cost a small amount of Glimmer. We wanted to avoid the “grab every bounty you see until your inventory is packed and sort them out later” experience without constraining players to the tiny inventory they found in previous iterations of the game.

In Forsaken, more vendors will have more bounties on offer, and some will provide Legendary (or better) rewards for completing them.

It’s fair to observe that we didn’t answer every question you might ask about the return of bounties. What would be the fun in that? You’ll discover exactly how they work and where you can find them next week, and in all the weeks that will follow.

At the time of this posting, one storm is dissipating online while another one gathers in real life. The GuardianCon fundraising stream is over, with millions of dollars raised for charity. Once again, we are left stunned by the passion and goodwill exhibited by the community. Congratulations to everyone who pitched in and ran their leg of the marathon.

Tomorrow, the after party begins inside the Tampa Convention Center, and the celebration is shaping up to be thunderous. We’ll be on hand to commit all challengers to teams of four to battle each other in Gambit. This is your final blog reminder that we’re also hosting an epic clash of content creators you may know on their mainstage.

At this very moment, our away team is building our booth. They’re hanging the art, building the network, and arranging all the velvet ropes. If you’re in attendance, they can’t wait to meet you.

We've got an in-depth look at every new super and subclass branch @DestinyTheGame 2's Forsaken expansion brings to the table. https://t.co/ah9NYQ1D1O pic.twitter.com/WjdCBOjHln

The first big location players will journey to in Destiny 2: Forsaken is the Tangled Shore. Watch us check out the locale while tackling a new public event and three Lost Sectors. https://t.co/kzIcYe8XZj pic.twitter.com/d103rAy93F

In today's Destiny 2: Forsaken feature, we take a look at the Exotic Auto Rifle Cerberus +1, which harnesses the power of Contra's Spread Gun (and four separate barrels) to deliver devastating damage in seconds. https://t.co/guj5sqozqY pic.twitter.com/uUQbO3JuAJ

Keep an eye on ’em. They’re not done showing off what awaits you this September.

Update 1.2.3 will deploy on Tuesday, July 17. Destiny Player Support will have more information concerning deployment times and download sizes here, but we have a quick preview of what to expect next week:

Additionally, some Heroic Strike Modifiers will be given slight adjustments in response to player feedback. Test Engineer Drew Martineau has a quick round of developer commentary on the goal of these changes:

Since the release of Update 1.1.3, we’ve been collecting player feedback concerning Heroic strike modifiers. On Tuesday, three of the more punishing modifiers will receive some adjustments. Ultimately, we want your Power, stats, and armor modifications to matter, and we realized that our debuff modifiers were a little too powerful to allow players to see their impact. Here’s what you can expect:

Stay tuned to bungie.net next week for the full patch notes, expected to become available at 9 a.m. PDT on Tuesday, July 17, 2018.

Over the past few months, we’ve been testing a new feature called the Prismatic Matrix. When we first announced this new reward system, we stated our goals for the experiment: 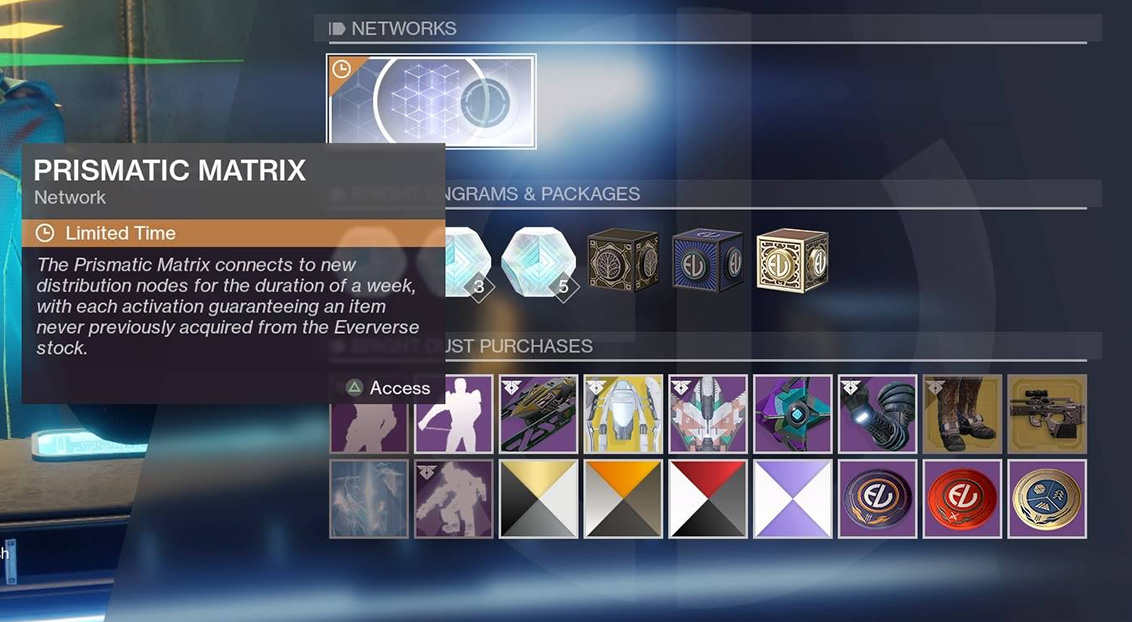 This week, the user interface calls specific attention to the limited time of the feature. To explain our previous objectives and future plans, here are some thoughts from the design team:

The original intent of the Prismatic Matrix was for it to be a special event—something to help players round out their collections, as the odds of earning the items that were eluding them improved as they continued to earn Bright Engrams. We had a limited number of weeks scheduled, designed to keep repetition to a minimum. That schedule of curated offerings is coming to an end, so the feature will be going on temporary hiatus starting next week. Thanks to some good feedback about this new feature, we’ve learned how we can make it better, so we’ll continue to support it in Forsaken. We look forward to your continued feedback and are excited to relaunch the Prismatic Matrix in the next season of Destiny 2.

There will be more on this topic soon. Before the launch in September, we’ll update this conversation with a full preview for how the Eververse Trading Company will be evolving to better serve you.

Community management involves a lot more than going to conventions and posing for pictures. Serving the Guardians is a team effort, and some of us are more tactical than others. The specialists on the Player Support Team are experts on how the game evolves over time.

On July 7, we launched Moments of Triumph on Bungie.net and the Destiny Companion. Destiny 2 players can now track their Triumphs online before they go live in-game with the Solstice of Heroes live event. The following is vital information that players should be aware of for Moments of Triumph:

For more information, players should visit the Moments of Triumph Guide and FAQ.

Next Tuesday, July 17, at 10 a.m. PDT, Destiny 2 Update 1.2.3 will become available to players. To allow players to download and install this update and prepare for the launch of Prestige raid lairs, “Leviathan, Eater of Worlds” and “Leviathan, Spire of Stars” will be temporarily disabled. These activities will become available for players to compete for World First at the following times:

For the Destiny 2 Update 1.2.3 deployment schedule, players should visit our Destiny Server and Update Status page.

Last week, we conducted the Destiny 2 free trial weekend on Battle.net. While players who participated can choose to keep Destiny 2 installed on their PC for use in future free trial weekends, they will receive SAXOPHONE errors if they do not own Destiny 2 when they attempt to launch the game outside of promotional periods.

People ask us a lot of questions about how we choose these weekly honors. The hunt begins when we look at our Creations page for entries. The #MOTW tag helps us know you’re submitting for competition. From there, we pick something that catches our eye. With the usual judges hosting sweaties in Tampa (Florida is so hot right now), I thought I’d assemble an alternate panel that includes some of my favorite community artists. Since each them leveraged their artistic expertise to lend a hand in celebrating excellence in multimedia, there are no points for second place.

Get ready to thank the academy. Here are your Movies of the Week.

Congratulations to all the winners. Please hold until next week before you start to ask dmg04 and Cozmo when you can expect to find your prize emblems. In my infinite wisdom, I put them on the road, and I never learned how to do that thing.

When your rightful community managers are back in the saddle, there will be patch notes and deployment status updates and all the hard work that gets done by the real heroes. It’s been my pleasure to return to my roots while they put on their show. Hope I wasn’t overly verbose. Old habits die harder than raid bosses.

This week at Bungie, Lord Saladin is ornamenting the Guardians again.https://t.co/sP1wo7qraR pic.twitter.com/nIT8HKhCc5