To buy the game visit Borderlands.com or the Epic Games Store and enter creator tag KYBER3000 at checkout to support me! 🖤 The original shooter-looter returns, packing bazillions of guns and an all-new mayhem-fueled adventure! Blast through new worlds and enemies as one of four brand new Vault Hunters – the ultimate treasure-seeking badasses of the Borderlands, each with deep skill trees, abilities and customization. Play solo or join with friends to take on insane enemies, score loads of loot and save your home from the most ruthless cult leaders in the galaxy.

A MAYHEM-FUELED THRILL RIDE
Stop the fanatical Calypso Twins from uniting the bandit clans and claiming the galaxy’s ultimate power. Only you, a thrill-seeking Vault Hunter, have the arsenal and allies to take them down.

YOUR VAULT HUNTER, YOUR PLAYSTYLE
Become one of four extraordinary Vault Hunters, each with unique abilities, playstyles, deep skill trees, and tons of personalization options. All Vault Hunters are capable of awesome mayhem alone, but together they are unstoppable.

LOCK, LOAD, AND LOOT
With bazillions of guns and gadgets, every fight is an opportunity to score new gear. Firearms with self-propelling bullet shields? Check. Rifles that spawn fire-spewing volcanoes? Obviously. Guns that grow legs and chase down enemies while hurling verbal insults? Yeah, got that too.

QUICK & SEAMLESS CO-OP ACTION
Play with anyone at any time online or in split-screen co-op, regardless of your level or mission progress. Take down enemies and challenges as a team, but reap rewards that are yours alone – no one misses out on loot.

Pre-order to receive the Gold Weapon Skins Pack! And click here for a detailed look at the bonuses for the Deluxe Editions!

Play as one of four all-new, deeply customizable Vault Hunters—the ultimate treasure-seeking badasses of the Borderlands. Customize your Vault Hunter with tons of personalization options and use their distinct skill trees to tailor abilities to your preferred playstyle.

Zane – Operative: Born into Pandora’s notorious Flynt family, Zane is a semi-retired corporate hitman who always has a gadget up his sleeve. His action skills include a SNTNL drone that flys around and attacks enemies with a machine gun, a deployable Barrier shield, and a Digi-Clone that simultaneously distracts enemies and dishes out damage and which Zane can teleport to switch places with.

Amara – Siren: Gifted with powerful Siren abilities, Amara is a renowned champion of the people and bonafide badass. Using her action skills she can Phaseslam the ground to damage nearby enemies and knock them into the air, Phasegrasp enemies in place with a giant ethereal fist, or even Phasecast an astral projection of herself that deals damage to everything in its path.

Fl4k – Beastmaster: FL4K is a wandering robot who always brings one of their three loyal pets into battle to buff stats and attack enemies. Their action skills let them send forth dive-bombing Rakk, teleport Gamma Burst-irradiated pets through rifts, and even Fade Away to temporarily become invisible while moving faster and regenerating health.

Discover Extraordinary Worlds. Your Borderlands 3 adventure begins on the familiar desert planet of Pandora from previous Borderlands games, but your journey doesn’t stop there. You’ll also travel to other worlds aboard your very own spaceship, Sanctuary III—a backwater swampland, a futuristic city, and a picturesque monastery are among the new environments you can explore. 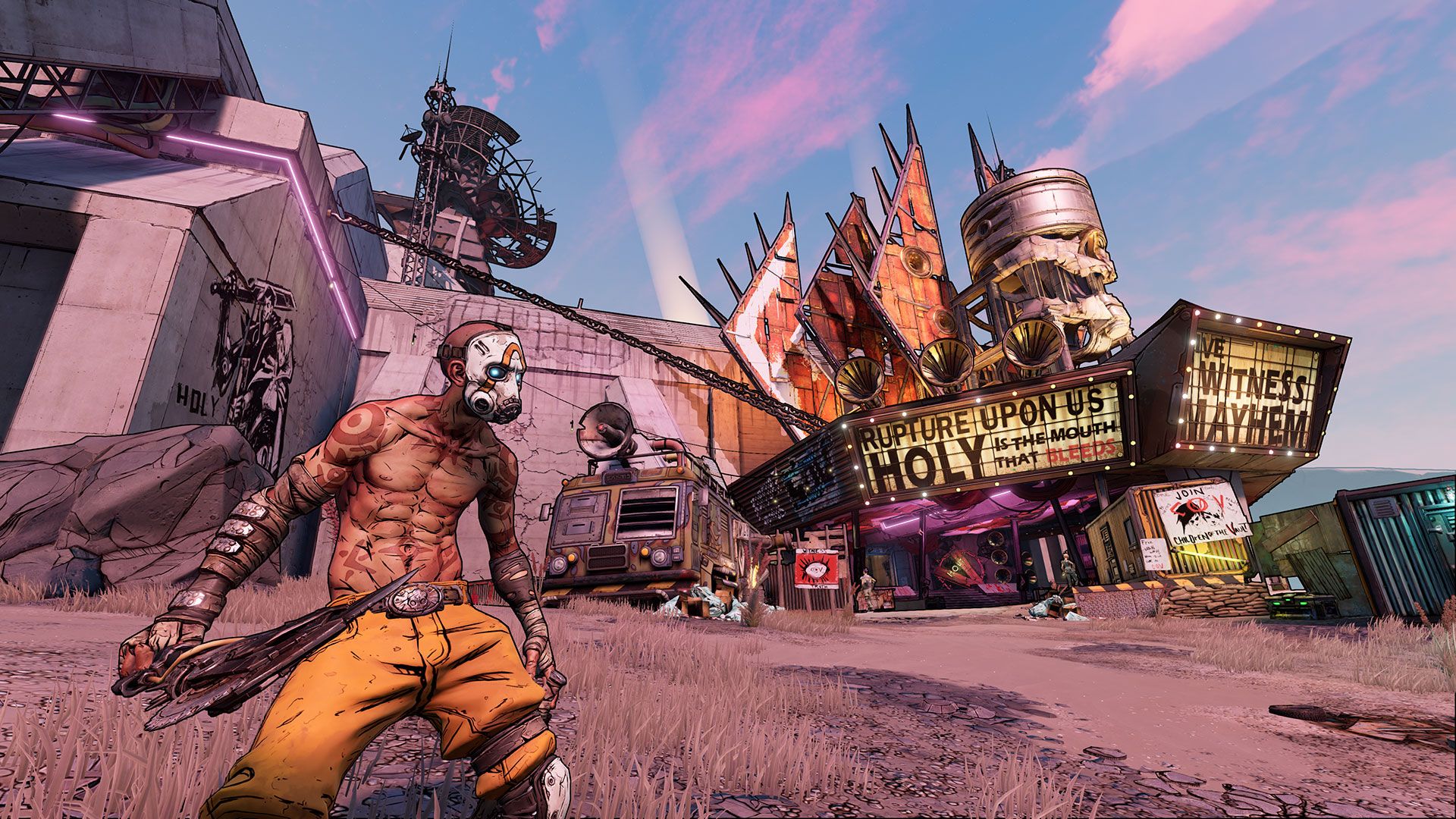 Pandora: A barely-habitable rock that the Children of the Vault have made their homeworld. Pandora’s searing-hot deserts, vicious wildlife, and burgeoning bandit population have proved too much for all who have tried to tame the planet and exploit its resources. The ruins of Dahl, Atlas, and Hyperion facilities litter the landscape, inhabited by all manner of Skags, Rakk, Varkids, and Spiderants that are intent on eating and killing you. Usually in that order.

Your interplanetary adventure in #Borderlands3 begins on Pandora. Tune in tomorrow as we explore this weird, wonderfully dangerous planet. pic.twitter.com/JC7iIoizmb 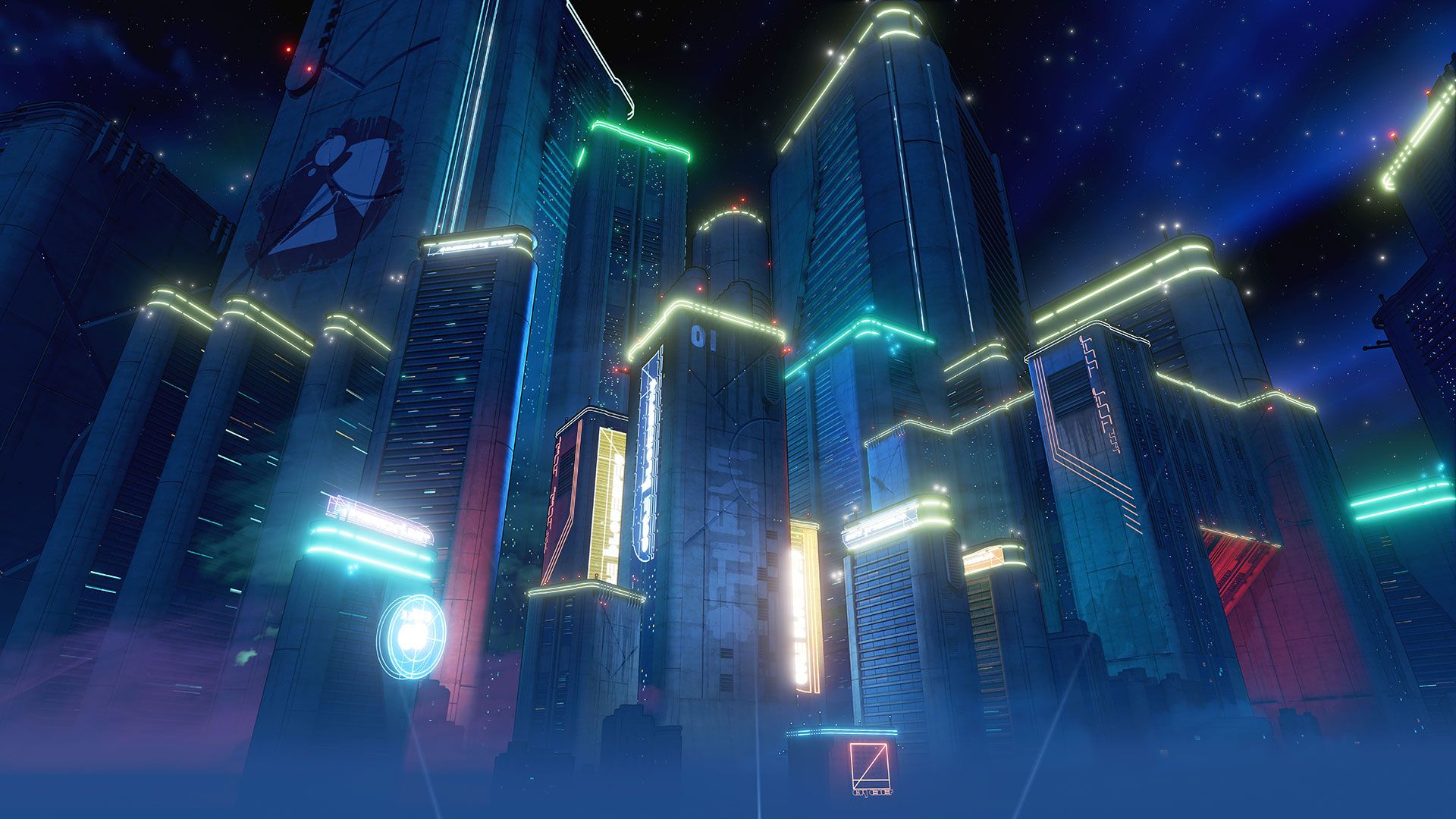 Promethea: Home to the Atlas corporation headquarters, Promethea is a metropolitan world covered in futuristic towers of chrome and glass. A recent siege by Maliwan has turned the urban environment into a warzone; their mechanized infantry patrol the streets, rodent/insect hybrids known as Ratches infest the sewers and back-alleys, and the Children of the Vault are seizing the opportunity to recruit displaced and disgruntled citizens. Atlas CEO Rhys Strongfork is getting desperate.

Visit Promethea. Home to the Atlas corporation, this metropolitan city-planet has been brought under siege by Maliwan, turning its futuristic urban environment into a brutal warzone. #LetsMakeSomeMayhem
Learn more: https://t.co/4Zgrwk0h4f pic.twitter.com/enrdl5HuWd 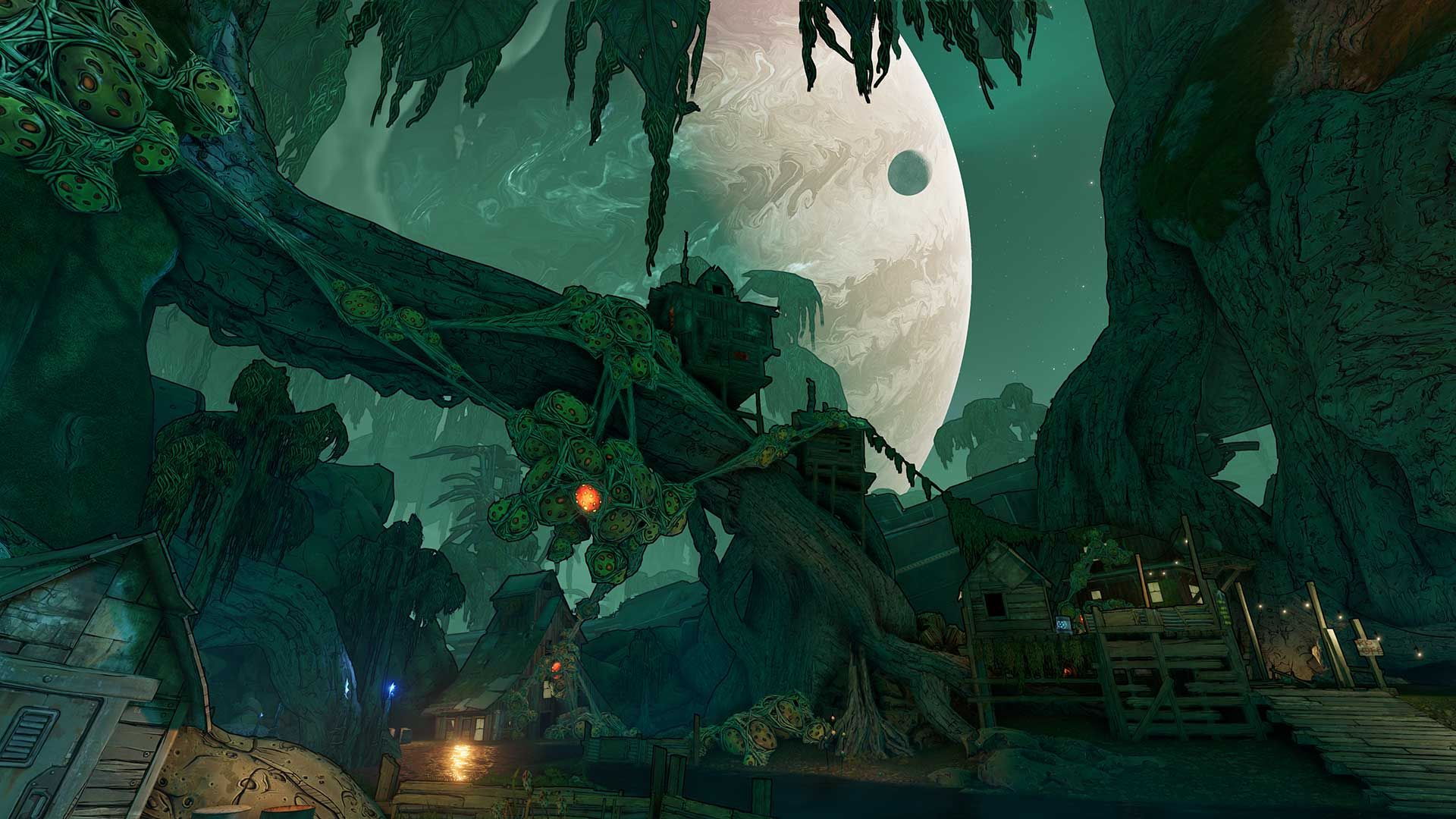 Eden-6: A backwater swampland of a planet, and family home of the Jakobs clan. Eden-6 is covered by lush greenery and stagnant waters, dotted with occasional settlements and the rusted hulks of crashed spaceships. Civilization has never fully taken hold here, and indigenous dangers including ravenous Saurians and semi-sentient Jabbers effectively rule the planet. As if you didn’t already have enough to worry about, the Children of the Vault have a presence here as well.

A backwater swampland of a planet and family home of the Jakobs clan, Eden-6 is covered by lush greenery, stagnant waters, and vicious indigenous dangers. #LetsMakeSomeMayhem 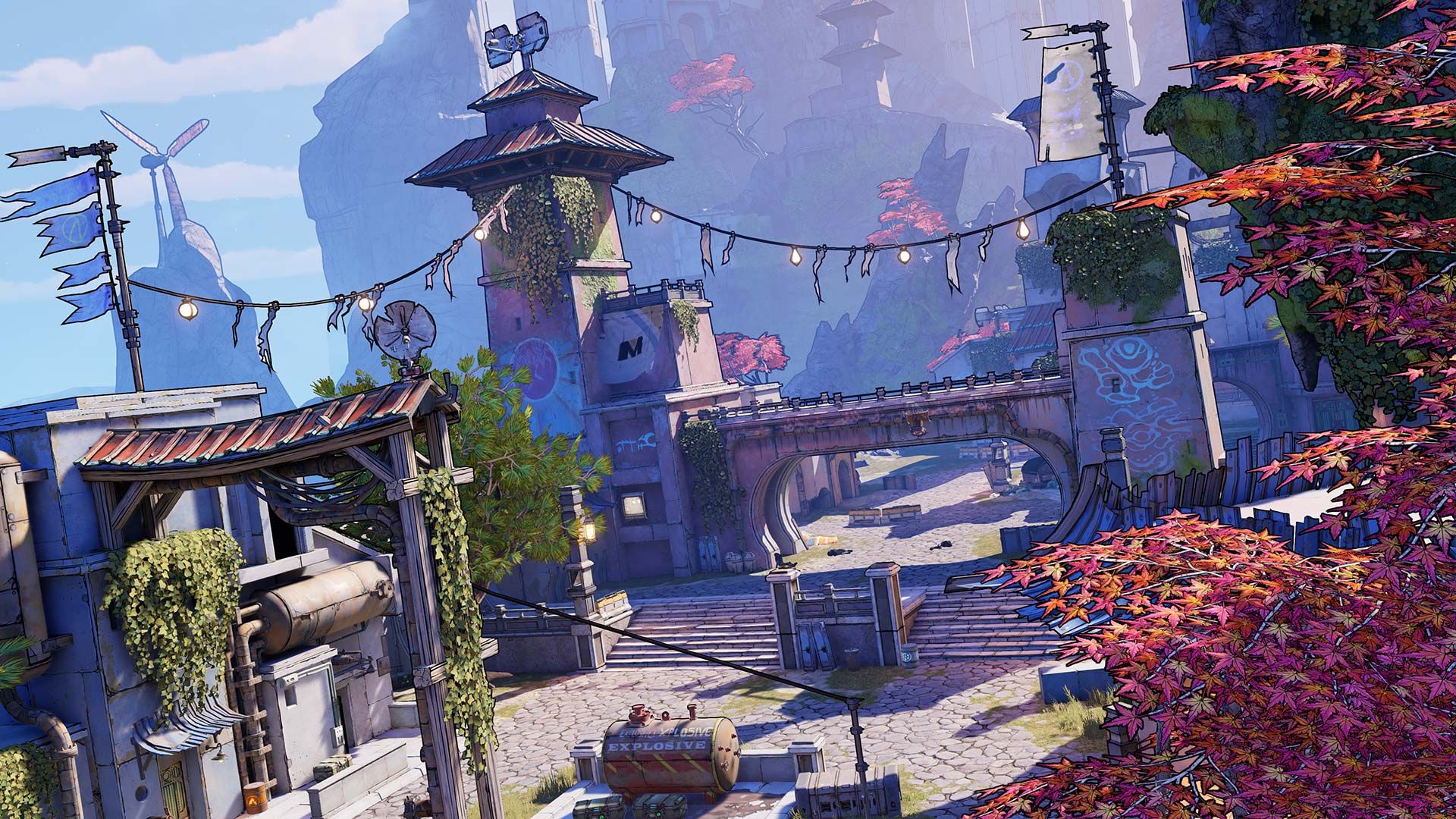 Athenas: A misty, tranquil planet that has recently attracted the wrong kind of attention. Athenas is mostly uninhabited, save for a sect of monks known as the Order of the Impending Storm who have made their home in the high peaks of the mountains. What secrets do they guard here, inside ancient walls that were built long before humans set foot on Athenas?

There are over one billion guns in Borderlands 3, and every fight is an opportunity to add to your arsenal. Some guns launch exploding sawblades, some never need to be reloaded, others grow legs and pursue enemies on foot when you throw them. Having trouble choosing? Rarity ratings and item scores make it easy to compare the power of your pickups at a glance, but you can also tell a lot about a weapon and its functionality based on its manufacturer. Check out the manufacturer details below:

Dahl: Toggle between alternate fire modes depending on your play style, your predicament, and your predilection for bonus damage.

Torgue: Switch between regular and sticky-projectile fire modes. Stickies do more damage if a bunch of them detonate on the same target.

Jacobs: Deliver devastating critical hits to enemies’ soft-and-sensitives, then joy-puke as your bullets ricochet towards other targets.

Tediore: Toss your gun like a grenade to reload, then watch it pursue a nearby enemy as a fully loaded version digistructs in your hand.

Maliwan: Toggle between two elements, charge your weapon, and deal guaranteed elemental damage with your finger glued to the trigger.

Hyperion: Aim down the sights to take cover behind your weapon-mounted shield and keep your finger on the trigger for increased accuracy.

Atlas: Step 1: Hit your enemies with tracker tags. Step 2: Unleash a hail of Smart Bullets that track towards your targets. Step 3: Loot!

MEDIA AND OTHER INFO

Jump headfirst into all things Borderlands to unlock unique content, in-game rewards, and more! Click here to learn what this program is.

This page will be updated periodically with new info about Borderlands 3. Last page update: 05/01/2019