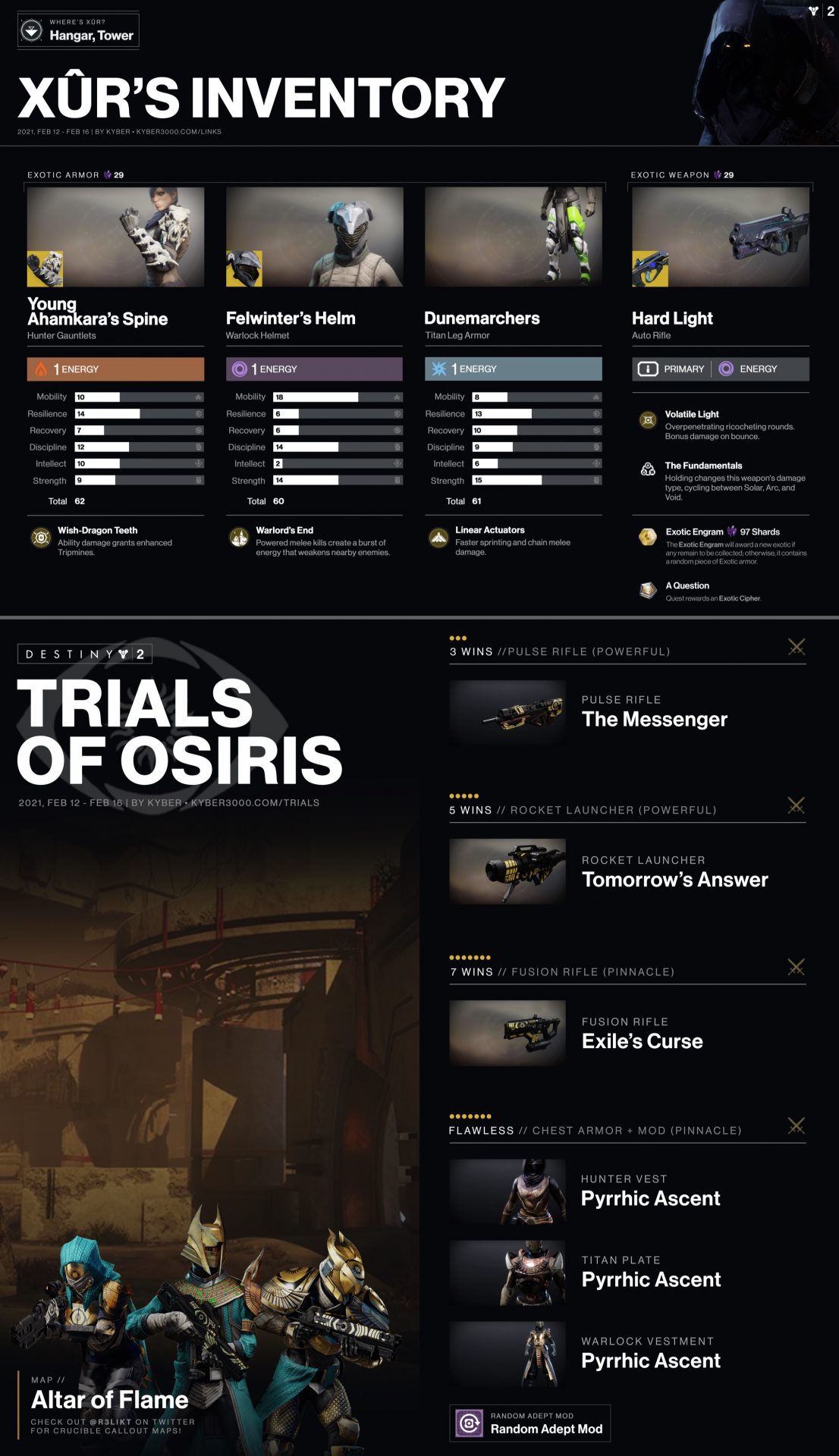 💠 This weekend you can find Xûr hanging out at the Hangar in the Tower and Trials is live on Altar of Flame for the first weekend of Season of the Chosen. Preview: This weekend you can earn The Messenger Pulse Rifle for 3 wins and a new Chest Armor piece (plus a random Adept Mod) for going Flawless. Check out the info below for a look at Xur’s Inventory, Trials info, recent news, and more!

NOTE: For the first few week or two there may be some activities and challenges not yet included/updated on posts or infographics (the Weekly Reset graphic will be updated throughout the season). Everything will be updated and back to normal ASAP, I appreciate your patience for the time being. 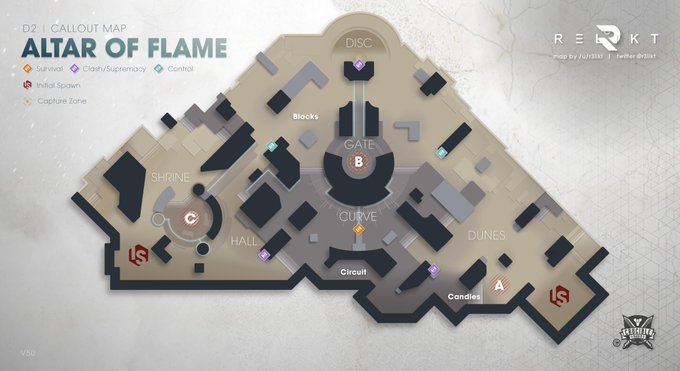 SEASON 13: SEASON OF THE CHOSEN

Live Now!! (Note: Some activities will require the Season of the Chosen Season Pass)

Next Thursday, February 18, Hotfix 3.1.0.1 will be released. Here is a timeline of events:

Below are some issues that will be resolved with Hotfix 3.1.0.1. A complete list will be shared when the update goes live. 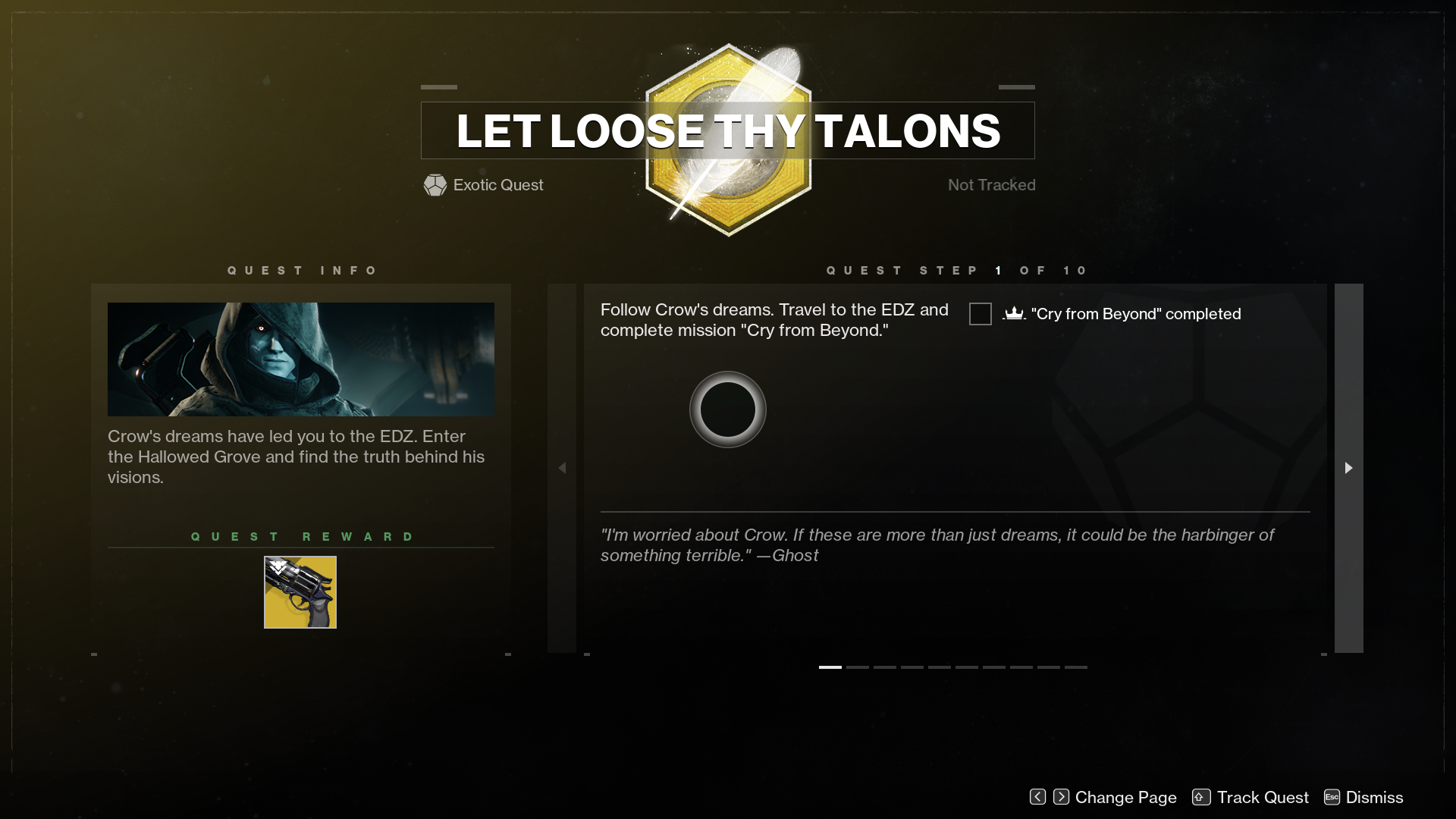 Over the past year, Bungie has made a handful of iterative improvements to the player’s quest experience. Early on, these improvements focused on helping players understand their quests when viewed together.

Most recently, Bungie added the Quest Details screen (view image above). This new screen allows you to dive into the details of each quest, which should help you:

Taken together, Bungie is hoping you feel more knowledgeable and motivated about the quests in your log. You can access the following screen by hovering your cursor over a given quest and using the Inspect command.

Bungie is excited to build on the Quest Detail screen in future updates with more improvements to the quest experience.

And now, onto some general patch notes:

All missing patch notes are being added to the Destiny 2 Update 3.1.0 article. If you haven’t taken a look at everything that’s changed this Season, stop by and give it a read!

This season, two strikes from Destiny 1 are making their entrance to Destiny 2 through the Destiny Content Vault. Bungie has a quick update on our plans for the Cosmodrome from the Development Team.

By The Bungie Dev Team: “Last summer, when we revealed our plans for the Destiny Content Vault – where we cycle out older underused content to improve our ability to evolve Destiny – we also committed to periodically unvaulting legacy content, merging some of the best that Destiny 1 and Destiny 2 has to offer. THat announcement included the reveal that the Cosmodrone would be returning, and that it would be ‘fleshed out to roughly Destiny 1 Year-1 parity’.

When we first shared our plans, we were still early in development and uncertain how far we would go with the Cosmodrome unvault. We were pretty sure it wouldn’t include the Plaguelands but what about the locations added in the Year-1 DLCs, or the awesome Colony Ship behind Sepik’s Lair with The Taken King? What about all of the public patrol spaces? How much of Cosmo would we need in order to accomplish our goals of having a great space to tell the new Guardian origin story while still giving veteran players a big dose of nostalgia via some updates to the strike playlist?

As we approached Beyond Light’s launch, it became clear to us that we had a choice to make: After returning all three of its original strikes, do we invest more time and resources in bringing Cosmodrome to D1 parity or do we switch our focus to building new experiences for Year 4 and beyond? Given that we believed we had achieved our original goals and knowing the community and team’s desire for new content, we chose the latter option. But, when we made that decision, we failed to properly update your expectations for how far the Cosmodrome experience was going to be extended and that was a mistake. So, to clear things up: With the Devil’s Lair and Fallen S.A.B.E.R. strikes returning, we don’t have any active plans to add more to the Cosmodrome than what is there will be focusing on new updates overall.

We will continue to use the Destiny Content Vault to drive variety in the live game in the future. The Cosmodrome was our first big push and later this year the Vault of Glass will return. We’ll share more later this year.”

I hope you all have a great weekend and enjoy Season of the Chosen!

In a universe changed by Darkness, go Beyond Light.https://t.co/pzBAZ3Mk1l pic.twitter.com/WkS8nYblsF

This week at Bungie, Season of the Chosen began.