💠 This weekend you can find Xûr hanging out at the Hangar in the Tower and Trials is live on The Dead Cliffs. Get a more detailed look at Xur and Trials below!

Where is Xur? Hangar, Tower (The green arrow below is where Xur is located) 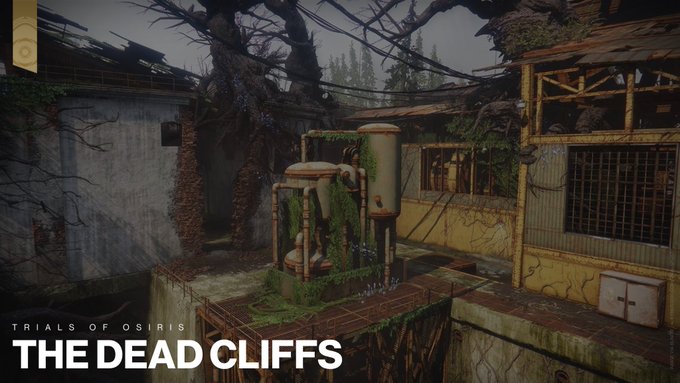 NOTE: Season 14, Season of the Splicer ends on August 24.

About: The Last City of humanity is built, not from iron and stone, but of heroism and bravery. Join your fellow Guardians and remember those who stood in defense of our home. Eva Levante awaits you in the Tower with words of gratitude and the promise of celebration.

More info will be added here next week.

🔅Here’s a look at Solstice of Heroes 2021 items. (View details at: https://t.co/D9B24JUbhA)#Destiny2 pic.twitter.com/kUcDuINfOr

Info from article by Bungie

Unlocks: Tuesday, July 06 for all players

How do you enter?

When signing in next Tuesday, Vault of Glass will offer a Master difficulty option to launch for you and your fireteam. While there is no minimum Power requirement to enter, enemies will be at 1350 Power, so you will want to earn some Pinnacle Power and raise your Artifact levels before attempting a run.

What can you earn?

First up, Master Vault of Glass unlocks the final Triumphs required for the Fatebreaker raid Seal and title. Once completed, players may equip their in-game title and purchase the Bungie Rewards pin if they so desire.

Second, Master Vault of Glass will also introduce Timelost weapons to Destiny 2. Timelost weapons can be comparable to Adept weaponry from Grandmaster Nightfalls or Flawless Trials Passages, but offer an additional perk in columns three and four for slightly more customization.

Complete Vault of Glass Challenges in the Master difficulty of the activity, and you will be rewarded. Each week will feature a specific Timelost weapon for you to hunt, rotating alongside the available challenge. Once you’ve earned a Timelost weapon, you may also purchase additional rolls from the chest at the end of the raid (on Master difficulty) using Spoils of Conquest. Note that these will be at a higher price than normal versions of these weapons.

Note: The raid challenge next week is for the Gatekeeper encounter, so I believe the Timelost specific weapon for next week should be one of the following: Found Verdict, Fatebringer, or Hezen Vengeance. The armor that could drop next week, could be Helmet or Legs. Unless I am misunderstanding how this will work (if I am I will make sure to update that info here). Once I know the weekly rotation for the Timelost weapon I will add it to the weekly reset infographic, weekly reset post, and raid challenges page. -Kyber (July 01, 2021)

Please note – Weekly reward lockouts are shared between both Normal and Master difficulties of Vault of Glass. That means encounters, challenges, and hidden chests will only award gear the first time you complete them in either activity each week. They must be completed at Master difficulty first to earn Timelost weapons and stat-focused armor.

Lastly, armor from the Master difficulty of Vault of Glass will focus on specific stats, rotating weekly. If you’ve been hunting a Prime Zealot Helm with a high spike in the Intellect stat, Master difficulty will give you greater chances for the distribution you’re looking for.

Get ready for a fight.

This won’t be a walk in the park if you haven’t dipped your toes into the Destiny 2 endgame before. Enemies will be tougher. They’ll be looking to put you down with more aggression. A few more Champions will be appearing to defend the Vault. More modifiers will be active, forcing you to think on your feet and come prepared. If you’re looking to increase your Power, make sure to complete your weekly milestones for Pinnacle rewards. One way to do that is in the Iron Banner. It’s active right now, so make sure to complete those bounties for additional Pinnacle rewards as you prepare for the raid!

Atheon will be seeing you next week. Good luck to all fireteams as they attempt their first Master difficulty raid.

These updates were originally planned for next season but will be going live next week with Destiny 2 Update 3.2.1!

Here is a run down about the changes coming:

Here are the roles Bungie intends each Special weapon to fill:

Note: Slug Shotguns are unaffected by this change.

To read about future changes coming to the Sandbox, check out the full TWAB article.

Read more about this and other changes coming: https://t.co/WiQsn82gvJ#Destiny2 pic.twitter.com/0gdoRHyZHN

Alongside the sandbox update, Bungie has a slew of bug fixes going out with Destiny 2 Update 3.2.1. Here’s a quick list of some high-priority changes to expect next Tuesday when the patch hits your hard drive.

In the next update, currently scheduled for 7/6, Bungie will be reissuing the remaining Moon and Dreaming City weapons with new perks. All of these weapons will drop from their original sources on their respective destination.

Here is the full list of the weapons along with an example of the new perks they can each roll with.

On Tuesday, July 6, Destiny 2 will undergo maintenance in preparation for Destiny 2 Update 3.2.1. Below is a timeline of events. Note, some times may be subject to change during this maintenance period:

Below are some issues that will be resolved with Update 3.2.1. A complete list will be shared when the update goes live.

In last week’s PSR, we announced that the new Bungie Store beta would be rolling out beginning on July 1, however, this launch has been delayed until later in the month. We will provide updates on the new beta launch date when it becomes available.

I hope you all have a good weekend and a Happy Fourth of July (to everyone that celebrates it)!!

Rejoice in a celebration of heroism and bravery.

This week, we're offering you a free, extended stay at The Penrose hotel!

The Spectrum Retreat is FREE to claim on the Epic Games Store until July 8.https://t.co/L09RPTOfxh pic.twitter.com/IHbxVQAx2c

Join Us on Discord

*A commission will be earned when eligible items are purchased using my affiliate link. Thanks for the support!