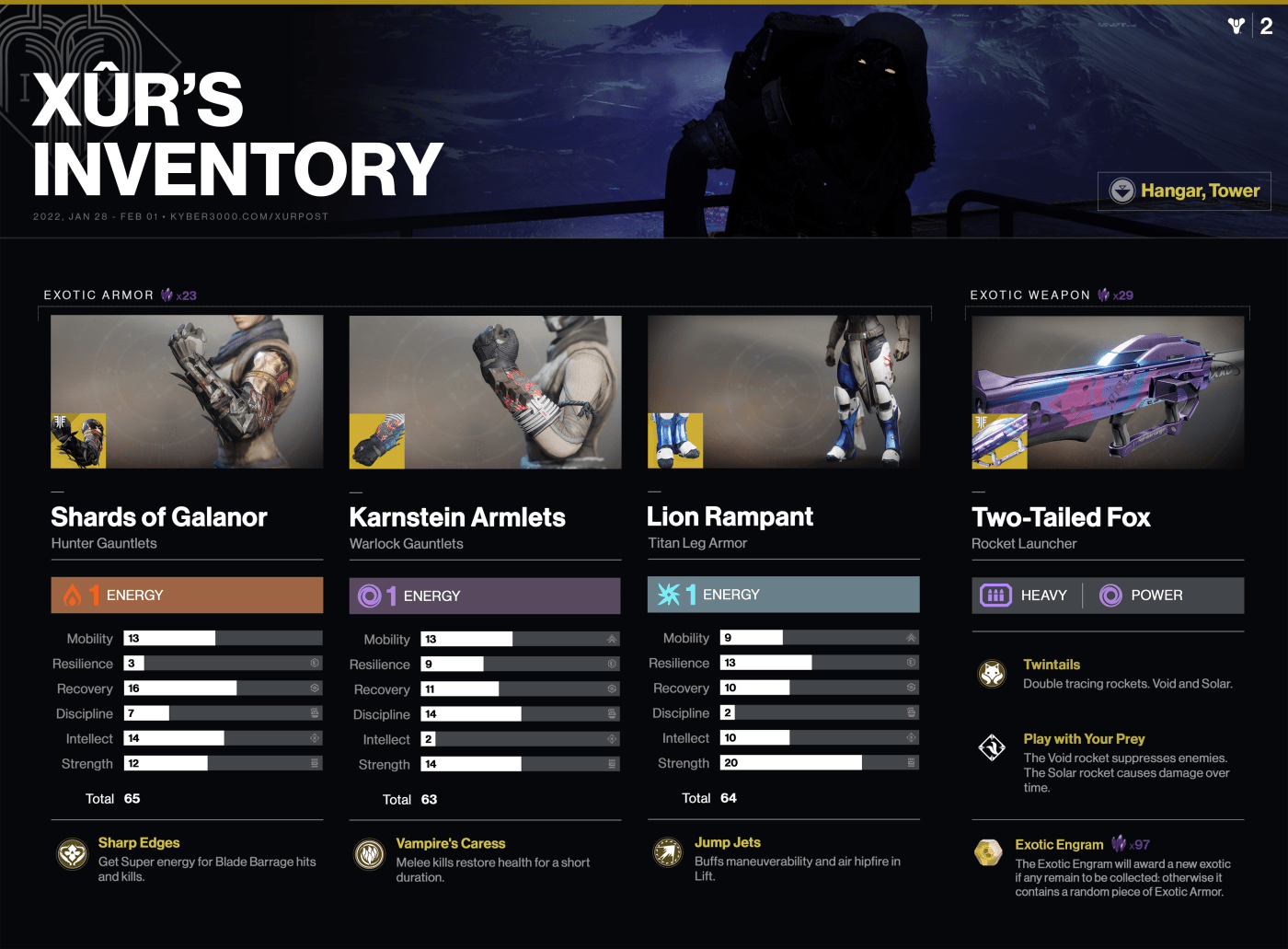 💠 This weekend you can find Xûr hanging out at the Tower’s Hangar and Trials is live on Javelin-4, with Adept Shayura’s Wrath as the Flawless Weapon. Check out the article below for a more detailed look at Xûr’s Inventory, Trials, and more!

A peddler of strange curios, Xûr’s motives are not his own. He bows to his distant masters, the nine. (Note: Xur offers random rolls on Exotic Armor meaning the stats/numbers are different with each purchase. Legendary weapon/armor stays the rolls that it shows but change every time Xur arrives.)

Where is Xur? Hangar, Tower

NOTE: View armor stats at light.gg or via the Bungie companion app if they have not been added to this page (images of armor and weapons will be uploaded below ASAP every Friday),

This is a 3v3 competitive crucible activity only available from Friday until Reset every weekend! Matchmaking is available! Earn exclusive rewards in Trials of Osiris by defeating other Guardians in this weekly Elimination playlist.

Rank Up Weapons (no reset)

Rank Up Weapons (with 1 Reset)

NOTE: If you know the perks on the these 2 weapons, please DM on Discord (Kyber#3000) or Twitter or you may comment below. I would greatly appreciate the info and help!

Rank Up Weapons (with 2 Resets)

Note: Kyber will receive a small commission whenever someone signs up for Prime Gaming or buys eligible items from Amazon.com using Kyber’s Affiliate link.

Since the Bungie Name feature went live, players have been asking when they can change their name. Bungie is investigating a way for players to change their Bungie Name in a future update and are currently targeting a date close to The Witch Queen’s launch date.

Upon an investigation into a player’s real name being used for their Bungie Name, Bungie has determined that this issue occurs when a player sets up a Steam account with an email containing their name, doesn’t change their Steam account name upon activation so it takes on the email address name, and then doesn’t add in a Steam display name. If Steam doesn’t have a display name, our Bungie Name feature will take Steam’s account name to use as a Bungie Name instead.

Player should claim the following rewards before The Witch Queen launches on February 22, otherwise, they will be lost:

Certain seasonal seal/title triumphs and rewards require multiple weeks to fully complete, so players who want to obtain those rewards should begin the process of unlocking them this week.  For activities, rewards, quests, and more that are entering the Destiny Content Vault, please click here.

THE ROAD TO THE WITCH QUEEN

We are now down to The Witch Queen being the next big thing to release for Destiny 2 (check out the Official Calendar above or at Bungie.net)!

Here is a look at changes coming next season for Ritual Reputations, Trials, and Nightfalls. Information below is from the This Week at Bungie article posted on January 27, 2022.

Here’s a quick preview of a returning Trials reward for next Season (The Summoner Auto Rifle). There’s another weapon, but Bungie wants to leave that for you to discover when Trials returns in The Witch Queen.

What’s Not Changing Yet?

Something that is Changing

Starting in The Witch Queen, when double ranks (or rewards) are active, those activities will have a modifier on the launch screen to remind you.

Bungie discussed in an earlier TWAB, that the Season 13 Battlegrounds activities have been added to the Vanguard Strikes playlist, and this playlist has been renamed Vanguard Ops.

As a reminder, the four new Battlegrounds coming with the new Season are:

The actual Battlegrounds activities are the direct-launch/no-champion version of the Battleground, as these match the length and difficulty of most of the Strikes in the playlist. Any bounties, quests, Triumphs, or challenges used to reference strikes now references Vanguard Ops instead.

Here’s a quick preview of some loot that you’ll be able to earn from Nightfalls next season. Look familiar?

Starting next season, there will be a single daily Lost Sector, which has both Legend and Master difficulties available at the same time (selectable at the entrance). Both difficulties give the same Exotic reward.

Bungie did not mention any specific changes for Crucible or Iron banner in the last TWAB (Jan 27, 2022), They did address the longer respawn times that were implemented in the 30th Anniversary patch, and then removed a few days ago.

Here is Bungie’s comments on that:

“When we original implemented this change, we were hoping it would spread out the pace of combat and reduce the number of times players spawned in and were immediately killed by the same Super that had just wiped them out. Despite the initial intention, feedback has shown that this wasn’t the best solution for the issues we were trying to solve. When we looked at the data, we saw unclear/mixed messages, partially because we implemented the change at the same time as large ability tunings, and the start of the Dawning:

When looking at both feedback and analytics and seeing little definitively positive, it was the obvious choice to revert Crucible respawns back to their original values.” -Bungie 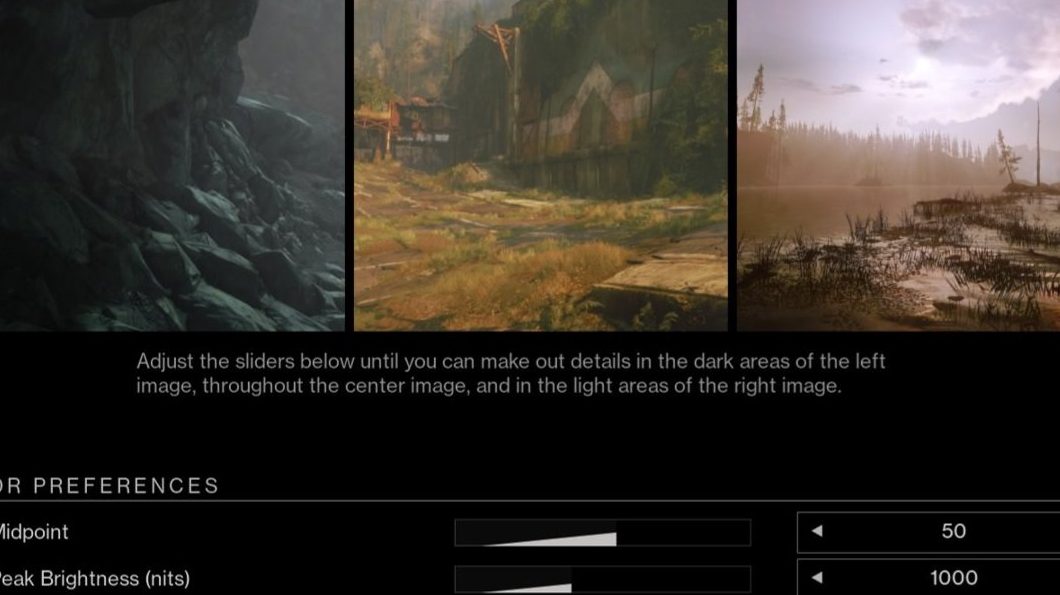 Here’s what you need to know about the HDR changes launching next month with The Witch Queen:
Windows 10 (and up): Windowed HDR is now supported.

Windows 10 (and up): Windowed Fullscreen should provide the same (or better) performance compared to exclusive Fullscreen.

Screenshots are now supported when playing in HDR on PC.

I’m Bruno and I still can’t believe I’m joining the Bungie Community Team as the new Community Manager for Southern Europe and Latin America. The world is filled with awesome and passionate Guardians, and it will be my honor to serve you however you need.

I know that there are a lot of players to meet and a lot of places to be, but if us Hunters are known for something, it’s for having allies in every corner and for always being on the go. So, I’m ready for this mission! Now don’t give me that look: I might main an Arcstrider, but I love my three Guardian classes equally. I’m always jumping between them and trying new strats while raiding or playing Trials with friends. Using weird, but effective builds is one of my favorite things to do in the game!

I can’t wait to experience all the incredible things that are coming to Destiny 2 along with you, both as an avid player and as your new Community Manager. If you are a content creator, a veteran clan leader, or a New Light, please, feel free to reach me on Twitter. I want to know what your Guardian looks like, what you expect from me as a CM, what you think your local communities need and, of course, I want to hear all your ideas about how the game we all love can keep getting better. Oh, and memes, send them my way, too!

Bungie Security Team laid out what’s been going on with some player bans and what’s next on the docket for BattlEye in the latest TWAB Article.

“Regular reviews of our processes, technology solutions, and community feedback are key elements to Bungie’s approach to security for its games. Today we are taking another step in our ongoing security journey at Bungie.

With the launch of Season 15, the Bungie Product Security organization began utilizing the BattlEye security suite. We are pleased to say that the security system has provided us with a monumental leap forward in our ability to monitor attacks that threaten Destiny operations and the player experience. It effectively prevents many actions from those who attempt to harm Bungie’s goal of building a community around our games that we can all be proud of. Its success protecting Destiny 2 has allowed us to safely review technologies and practices that were previously deemed too risky to the product and our players.

In December 2021, we began a survey of risky behaviors that we felt were mitigated by BattlEye. Based on the review we’ve identified 68 players that were banned in association with the use of ProcessHacker since August 2021. Of those, 61 players were identified as having no other indicators they were attempting to attack Destiny 2. These players were unbanned as of January 24th.

We expect this will not be the last time we unban players who were previously banned for security concerns. However, our efforts to review and improve our product security practices and methods means the unbans will be the result of disciplined investigation and our ever-evolving understanding of the risks to Bungie, Destiny 1 and 2, and, ultimately, to our players. The process will take time, and we thank you for your patience as we work to improve our games and your experience with them.”

If you didn’t already know, there is currently a giveaway live on Discord right now (ends tonight at midnight PST) for a Digital copy of The Witch Queen (Standard Edition) on Steam! Make sure to join us on Discord and follow us on Twitter and Instagram to get the latest on Destiny 2.

As always I hope you all have a good weekend, take care!