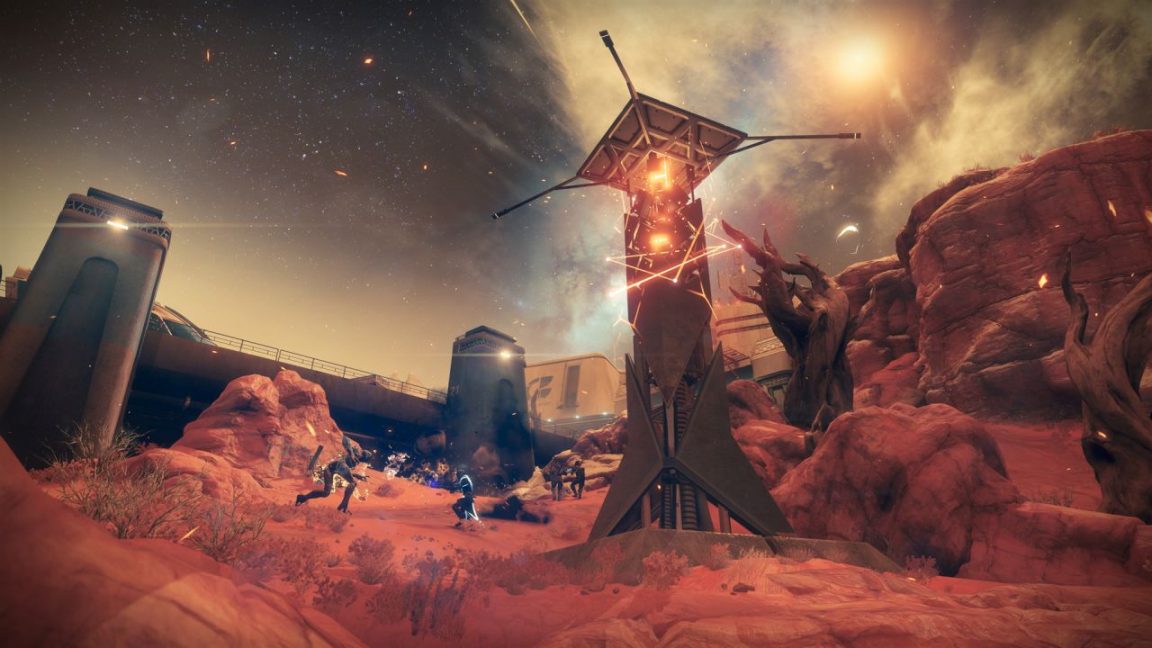 In this horde mode type of activity there are a total of seven waves with a boss fight on each wave as well as a final boss on wave 7. There is a total of five unique final bosses that will rotate each week. Escalation Protocol has rewards that are unique only to this activity and will change each week. (Note: Players must complete the Warmind campaign before they can activate Escalation Protocol. This activity will start anytime it is activated by a player instead of on a schedule)

These bosses rotate weekly and appear at the end of Level 7, each with their own unique mechanics.

Bok Litur, Hunger of Xol (Hive Knight) – No major mechanic, only requires extensive firepower to take down. (This boss can drop: All 3 weapons)

Damkath, the Mask (Hive Ogre) – Can only be damaged by shooting the growth on his back. (This boss can drop: Ikelos Sniper Rifle)

Kathok, Roar of Xol (Hive Knight) – Kathok has an immunity shield that can only be brought down by Swords, which are obtainable by killing Severing Knights. (This boss can drop: Ikelos SMG)

Naksud. The Famine (Hive Ogre) – Each Thrall that reaches Naksud will heal the boss. Kill the thrall immediately or deal enough damage to defeat Naksud in one go. (This boss can drop: All 3 weapons)

Nur Abath, Crest of Xol (Hive Ogre) – This boss is surrounded by a transparent aura that grants him an immunity shield whenever any Hive passes through it, to remove it kill all enemies in aura. (This boss can drop: Ikelos Shotgun)

How to bring 9 players into Destiny 2: Warmind’s Escalation Protocol

Escalation Protocol – How to get Armor by gosunoob.com

Encrypted Cache Key – How to Get & Decrypt by gosunoob.com

Note: You’ll need a Decrypted Cache Key to open the final wave 7 loot chest. Completing Heroic Strikes, Nightfall’s, Heroic Adventures, or the Leviathan Raid can drop Rasputin Key Fragments, of which you’ll need seven to haul to Ana Bray to turn into an Encrypted Cache Key. To decrypt it, you’ll have to endure all seven Protocol waves to bind your key to the culminating chest after defeating the final boss. As with the Leviathan Raid, this locks your character out of the Protocol loot table for the remainder of the week, so don’t bother grinding additional key fragments until next reset unless you’re running multiple characters. See guide below for more details about how to get and decrypt Cache Keys. (source: pcgamer.com)

Escalation Protocol has been a hot topic since the release of Warmind—we’ve been tracking feedback ranging from difficulty to fireteam size. Design Lead Jacob Benton and Design Lead Ben Wommack are making some changes to the experience.

Jacob/Ben: The moment this weekly update goes live, the Power levels for Escalation Protocol enemies will be lowered in waves 4–7. Waves 1–3 are unchanged and will remain at 370 Power (so still watch out for that level 2 Wizard boss).

Players who have stayed on Mars since before this update will need to return to Orbit and land on Mars again to see the following change:

NOTE: To avoid matching into an area that has been running since before the change, wait a short time after this update before landing on Mars again to attempt Escalation Protocol.

How We’re Making This Change

Normally changing enemy Power levels requires a patch, but during development, we created unique server flags which can flip between two sets of Power levels for all Escalation Protocol enemies. These were created in the wake of the community summit, when we decided to make the activity even more difficult. The flags don’t require any download from you to flip, which is how we can enact this change so quickly.

Reasons for This Change

We’ve been looking at our internal data while listening to all of your feedback about Escalation Protocol since the launch of Warmind. Reading these stats, not as many players are attempting Escalation Protocol with a fireteam of three as our designs intended, mostly because of how difficult waves 6 and 7 are. Tweaking the difficulty of waves 6 and 7 very quickly through Power level changes is something we can do right away because of the server flags mentioned above, rather than waiting a number of weeks to deliver a patch.

By reducing the Power levels of the latter waves, we are intending to make Escalation Protocol more approachable for players who want to try the activity at 385 as a fireteam of three with potential help from others in the world. Getting nine players into the same space will still be possible, but for those at or close to max level, it shouldn’t feel as necessary as before. If anyone is worried that we’re nerfing this activity into the ground, rest assured that it will still be a highly difficult end-game experience. All the mechanics, timers, and enemy behaviors will remain unchanged, so you should still plan to bring your best team, gear, and strategies to succeed.

Article regarding rewards by Bungie:

Escalation Protocol rewards are split up in to 3 main channels: vanity, weapons, and armor. Each channel operates a little bit different to give people different pursuits and provide rewards at different rates/tiers. I think the diversity of this reward delivery is something we haven’t done a lot of in Destiny 2, so I’m super curious how it feels once you get your hands on it. That aside, let’s jump in!

Vanity: These rewards are low drop chance, and can come out of any Escalation Protocol chest you open during the event. The further in you get, the higher chance the chest has to grant one of the EP exclusive vanity items. However, even if you can only clear up to wave 3 (the first wave that spawns a chest upon completion) then you can get a chance (admittedly very low…) at getting one of the vanity items. EP has an exclusive Ship, Sparrow, and Ghost.

Weapons: These are your grindable rewards. They don’t drop as power upgrades past the soft cap (so you’ll want to infuse something in to them if you’re past 340) but you can spend as much time chasing them in a week as you want. They’re a low drop chance from the wave 7 boss, and the reward pool changes for the different bosses. Three of the bosses have a specific weapon (between shotgun, sniper rifle, and smg) tied to them and will only drop that weapon. The other two bosses can drop any of the three weapons if you just want to grind and roll the dice.

Armor: The armor set comes from a chest that appears after beating the wave 7 boss. This chest requires a key to open, and characters can earn one key a week by playing other Warmind activities to build and charge their key. The armor pieces that come out of the chest are awarded in a specific order, and you won’t see repeats until you’ve collected the entire armor set. The order is Class Item -> Legs -> Arms -> Chest -> Head. (If you’re wondering why Class Item is first, well, I main a Hunter. Capes for life.)

I should note that while not really part of one of the three main reward channels, the unique Escalation Protocol shader is one of my personal favorites (because I love orange) and comes from killing the final boss.

Hope this clears up any confusion, and let me know if there are any other questions about EP rewards I can hopefully help with.

Escalation Protocol is a player-initiated Destiny 2 activity that can only be found on Mars. Players that successfully complete all of the progressively more difficult levels of the activity will face a prestige-level boss encounter that rotates weekly.  For more information on Escalation Protocol, please see below.

Players can initiate Escalation Protocol by interacting with the bunkered towers located throughout Mars.

Escalation Protocol may not be available to initiate if a Public Event is active in the same area.

Once Escalation Protocol has been initiated, a large tower will rise up and start the first level of the activity.

If the participating players fail to complete a level, they can restart the Escalation Protocol immediately.

As mentioned above, Public Events cannot be active during the first level of Escalation Protocol.

Incoming Public Events can interact with an active Escalation Protocol to create a more challenging experience.

Players may earn rewards from participating in Escalation Protocol, including rewards exclusive to the activity.

A Decrypted Cache Key is needed to open the loot chest from the final boss of Escalation Protocol.